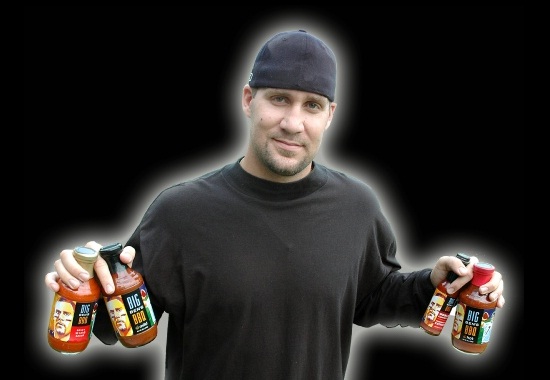 Milledgeville was unfortunate for any number of reasons. Coming up on three years since whatever happened happened, the public image of Pittsburgh Steelers quarterback Ben Roethlisberger has still not fully recovered. Perhaps it never will. Realize the incident was so polarizing to the advertising community that a company which makes beef jerky dropped him as a client. Because when I eat my beef jerky, it damn well better be made by a company that enforces its morality clause.

Thankfully, Big Ben is back in the meat byproduct game. He’s recently lent his name to a line of smoked ribs, pulled pork and barbeque sauces. My reaction upon finding this website was the same as when I first laid eyes on Ben’s sham wife; this is the best a two-time Super Bowl champion can do? Then I learned the proceeds from the sale of these products goes to local charities.

Still, good Tebow look at that picture. They couldn’t have, I dunno, found a table to display the sauces? We’ve seen Ben’s house, complete with all the touches you’d expect from a meathead jock (#7 stenciled on the floor of his pool, giant trophy case), I find it hard to believe he doesn’t own a grill. You just know some bored Steeler hater is gonna photoshop a bunch of PBRs over those bottles and make some lame frat boy/rape joke. While we might hope the charitable nature of this endeavor would prevent people from taking the same tired cheap shots, remember that sales from the Terrible Towel being donated to mentally disabled children never stopped opposing fans or players from desecrating it.

Anyway, Ben was on the WDVE morning show to talk about his fine bbq sauces. He also talked a little about his off-season and reiterated the difficulty he was having learning new offensive coordinator Todd Haley’s playbook. It’s a pretty interesting little interview which you can listen to or download by clicking here. Play it on your iPod while you’re grilling out this weekend, preferably with Roethlisberger’s finest Honey Mustard sauce.