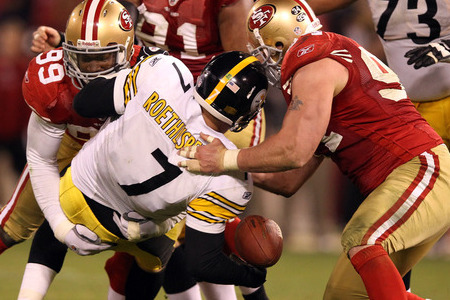 Pittsburgh Steelers quarterback Ben Roethlisberger was busy last week. After graduating from Miami University two Sundays ago, he’s been popping up all over the media. I usually pay little attention to these kinds of publicity tours – I’m sure Ben’s agents and PR people encourage him to increase his media presence but no matter how funny or interesting he comes across, he’s never going to be the next Discount Double-Check or Chunky Soup pitchman because of his past mistakes. Unless Ben sticks his steel-plated foot in his mouth, like when he dissed his receiving corps by saying the team needed “a tall wideout,” nothing particularly newsworthy usually comes out of these tours.

Well, Ben didn’t commit any faux pas this past week but he did make a couple comments worth noting. First, he was on the Dan Patrick show (Is he still around? I thought he’d be back selling used cars by now.) where he was naturally asked about this winter’s hot topic, BountyGate. In particular, Patrick asked if he ever felt like another team had put a bounty out on him. I figured he’d mention the Ravens. Not simply because their our chief rivals but because we know for a fact they put bounties out on players. For years and years the loudmouths on their D talked about “getting” Hines Ward and when Ed Reed knocked out Rashard Mendenhall a few seasons back, they again mentioned “targeting” certain Steelers.

Instead, Big Ben gave a surprising answer. He mentioned the San Francisco 49ers game from last year where he evidently felt something squirrelly was going on. I’m sure we all recall that game, it came a week after Ben had rolled his ankle against Cleveland. Ben was almost completely immobile, combined with the Niners speedy hard-hitting D and our porous offensive line, he took a hellacious beating all game. I didn’t recall seeing anything out of order, other than the lights at Candlestick Park, but Ben didn’t really elaborate by what he meant.

I don’t really complain about that stuff, either. But I think when we played San Fran, I felt like there were some things going on, some extra . . . Now, obviously, I did have the ankle and I was playing, so there was kind of a bull’s-eye on there anyway. But for the most part, guys play tough and you go into a game expecting it. I expect to be tougher than them.”

Of course, the NFL’s apologists at the Four Letter immediately rushed to investigate. Some dork at ESPN.com (who lives in SEATTLE? Hmmm… Another crybaby Seahawks fan?) claimed to have looked “at every offensive play” from the game and concluded he saw nothing dirty or questionable. Uh, if it were obvious from game tape that players were targeting another player, wouldn’t we have known about the Saints’ Bounty program before one of their guys tattled to the Ginger Dictator?

I wouldn’t expect anybody to acknowledge Ben’s claims because this is clearly a story the NFL wants to go away. At the same time, the Steelers inspire more jealousy from both other fanbases and media types than almost any other team. Meanwhile, Ben is one of the most underrated and under-appreciated players in the entire league. Add all that up and it makes perfect sense for his claims to be dismissed out of hand. As I said, I don’t recall anything unusual about the game, other than Ben had to be made of iron in order to survive it, but if he thought the Niners were taking liberties, I believe the Niners were taking liberties.

I believe him if for no other reason that I would never put anything past the brothers Harbaugh, the two biggest assholes in the league.

*Ahem* Of more tangible concern is another tidbit Roethlisberger gave to Uncle Eddy Bouchette at the P-G. He was asked about new offensive coordinator Todd Haley and Ben revealed it’s been a struggle to get a handle on the new playbook. What was most concerning to me was his comment that not only are the players working to learn it, it’s taking a while for Haley’s assistant coaches to figure it out. Good grief.

I half expected something like this to happen. There are always growing pains when learning a new offense. Thankfully, the Steelers have maintained continuity throughout Ben’s tenure here so he’s never really had to deal with that problem. When Bruce Arians replaced Ken Whisenhunt, he kept the majority of his offense in place. The only real change was in terms of playcalling whereas it appears Haley is bringing in an entirely new system.

And the system overhaul worries me because, bachelor’s degree aside, Ben never struck me as the brightest bulb on the tree. By all accounts, he only had a very basic grasp of the offense his rookie season and it expanded only slightly in year two. It wasn’t until his third year in the league that he finally had command of the offense. While Ben isn’t a complete doofus like say Dennis Dixon, who only learned a handful of plays after four years, I think expecting him to be totally comfortable with the new system by game one would be unrealistic.