A sea of Terrible Towels. Obnoxiously long lines at the gates as security personnel search each bag like they’re afraid Bane might show with a nuclear bomb – Something the NFL has mercifully attempted to fix with their Draconian new purse policy. A chorus of fans chanting “Heeeeath” after pretty much any tight end makes a catch. “Renegade” playing on the scoreboard.

All things which contribute to the experience of attending a Pittsburgh Steelers game at Heinz Field. On the flip side, there are just as many things one doesn’t expect to encounter. Empty seats. Cheerleaders.

Well, starting this Sunday when the Steelers kick off the 2013 season by welcoming the Tennessee Titans to the Big Ketchup Bottle, there will be a new aspect to the game day experience: Band Geeks. END_OF_DOCUMENT_TOKEN_TO_BE_REPLACED 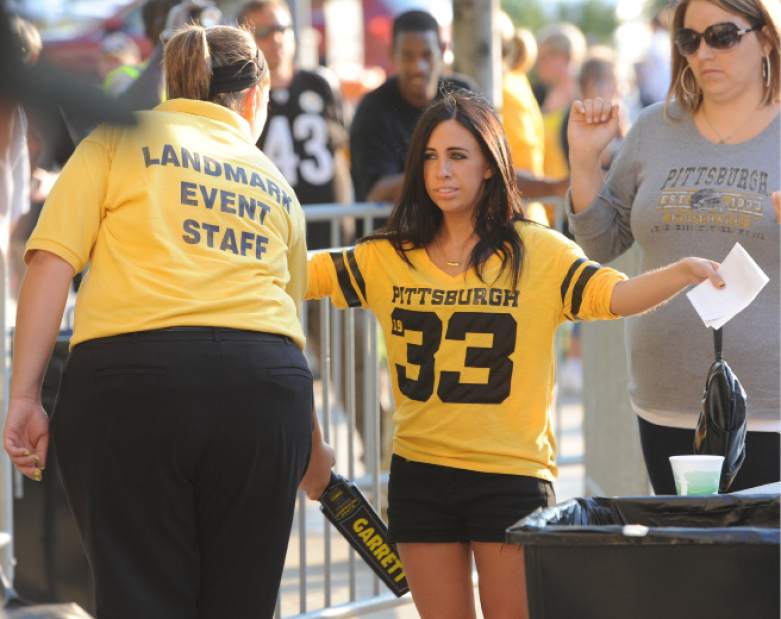 No NFL franchise has a stronger fan base than the Pittsburgh Steelers. And no NFL franchise does better with the ladies than do the Pittsburgh Steelers. So for the two or three female members of Steeler Nation who read this blog, consider this post a public service announcement. When the preseason kicks off at Heinz Field on Saturday night or when the season proper begins at home on September 8th, the Steelers and NFL have a message for you: “Leave your crap at home!” END_OF_DOCUMENT_TOKEN_TO_BE_REPLACED 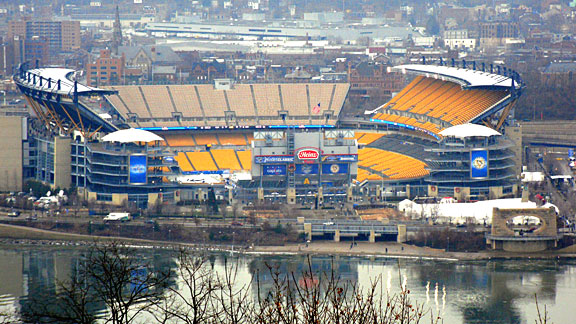 If you’ve paid any attention to the news the past couple days, you probably heard a little something about the weather we’ve been having here in the Northeast. Hurricane Sandy, what always subtle media types are calling “Storm of the Century,” tore through the eastern seaboard causing epic damage. The brunt of her fury was felt in New Jersey and New York and while talking about things like football games may seem trivial when homes are destroyed and millions are without power, this is a football blog so let’s proceed while being fully aware of our place in the grand scheme of things.

This Sunday, the Pittsburgh Steelers are slated to play the New York Giants in the New Meadowlands aka MetLife Stadium. This would be their first game in the new home of the Giants and Jets since they opened their new digs back in 2010. Whether the game kicks off on Sunday is still up in the air. The field is reportedly a mess although I’m sure it’s no worse than Heinz Field after a typical weekend of football. The concern is with the power grid and whether public transportation will be operational enough for people to actually get to the game.

The league is reportedly planning to go ahead with a Sunday afternoon kickoff as scheduled. If problems arise, the reports are they’d move the game to Monday which kinda confuses me. If things are a mess on Sunday, why would they magically be solved 24 hours later? When New Orleans got sunk by Hurricane Katrina, they didn’t just change the date, they moved the game 2,000 miles north by relocating the venue from NO to New York.

Regardless, a game will be played some where.

In the meantime, I was planning to use the Black and Gold’s initial trek into MetLife to talk about a wonderful website called Stadium Journey. My folks moved to Tampa a few years back (and have now experienced the exact same number of hurricanes as we have, go figure) and I immediately started planning my Spring Training itinerary. In looking for a site that might point out what venues are most fun, I stumbled across  Stadium Journey.

Stadium Journey is basically your AAA guidebook for sports arenas. They do a comprehensive job, and I mean COMPREHENSIVE job, of obsessively covering every possible place you can watch a sporting event. When you can find a review for the home of the Brevard County Manatees, you know you’re dealing with pros.

This being a Steelers site, I’m sure most of you wonder what they thought of the Big Ketchup Bottle. As you can see by their review of Heinz Field , they were quite impressed with almost every facet of the place. They didn’t even hold those hideous mustard yellow seats against us.

I occasionally receive a message from a member of Steeler Nation saying they’re coming to town to take in their first Steelers game. They usually conclude by asking if I have any tips regarding the experience. Unfortunately, I’ve never been to a Steelers game at Heinz Field. For one, I hate the cold weather. For two, I have a 55 inch plasma 3DTV. And lastly, I only get offered lousy seats for games nobody wants. So why would I want to freeze my ass off way up in peanut heaven when I can sit home and enjoy the game in ideal comfort?

If you want to know about Heinz Field, just check out Stadium Journey’s write-up. They do a better job than I would anyway.

One note, and it’s my only quibble with the review. I have been to Heinz for several Pitt games so I have to take issue with the only real negative part to the review concerning access to the stadium. The reviewer complains about parking, the price, location, and lack thereof. Well, when I go to Heinz, I take the Clipper over. Tickets are only $10, far cheaper than the expensive lots they complain about and the boat lets you off literally a stone’s throw from the stadium’s entrance. They run on a fairly regular schedule so you never have a long wait nor is the boat ever obnoxiously overcrowded. It’s by far the easiest and least stressful way to get to Heinz and I’m a little surprised the reviewer totally missed it.

So there you go, Stadium Journey, your one stop shop for all the Heinz Field info you’ll ever need. And while your over there, check out some of the other entries. We all know how Steeler Nation loves to take over opposing stadiums so if you’re one of the millions and millions who live outside Steeler Country, bookmark the site in case you ever decide to be a member of those invading hordes.