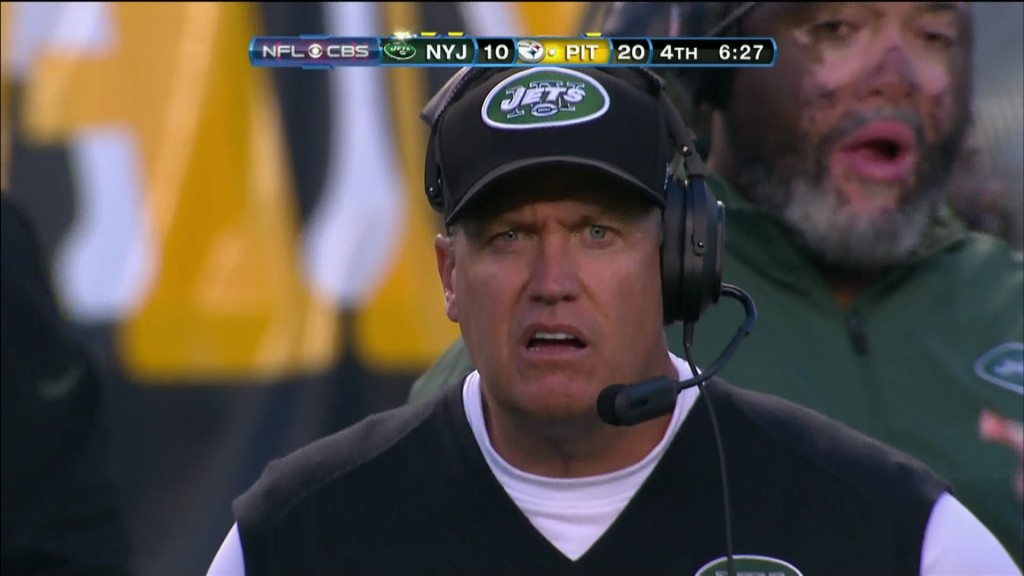 Mother Nature intervened last night to delay the latest installment in the Pittsburgh Pirates descent into abyss. Okay, so they actually won for once, stick with me here. With the Bucs in rain delay, I was able to watch Monday Night Football instead. And I’m glad I did because seeing Peyton Manning toss three picks is definitely not to be missed. Although it does make me worry about the state of the Pittsburgh Steelers defense all over again.

This post isn’t about the Steelers D, it’s about Mike Tirico. What, what?  After the first half of the Broncos-Falcons game lasted nearly two hours because simple calls were taking longer than a Microsoft product launch, Tirico went off on the NFL’s replacement officials. Finally a talking head, all of whom are careful to toe the company line, broke ranks and said what everybody has been thinking.

I haven’t watched a ton of football apart from the Steelers but if our first two games are indicative of what’s been going on, I’m surprised nobody else has spoken out.

The Denver game was a complete mess. The refs called a half dozen “illegal formations” which I suspect weren’t illegal since I can count on one hand the number of times I saw it called all of last season. They gave Mike Tomlin a challenge even though the flag came in well after a play had been run. They missed an obvious facemask on Big Ben which would’ve wiped out a fourth down field goal try and set the Steelers up deep in Denver territory.

All that said, I didn’t make a huge deal out of it because I think it’s stupid to romanticize the regular referees. They miss facemasks. They make ticky-tack holding calls. On average, they do a far better job than we’ve seen from the scabs although this revisionist history making them out to be paragons of virtue is kinda ridiculous. So with that in mind, I mostly stayed out of the growing internet backlash against the replacements.

The officiating in the Jets-Steelers game was an absolute debacle. It was so bad that NFL.com has posted a video of the phantom pass interference call on Ike Taylor under the heading of “What were the refs calling?”  Considering the Ginger Dictator has decreed nobody is to critique the scabs under penalty of death, it’s fascinating that the league’s own website is mocking their shitty officiating.  Here we are two days later and I’m still trying to figure out what in the blue hell was flagged on that play.

When the action unfolded and the flag was thrown, everybody thought it was on Ryan Clark for playing football, er, hitting somebody too hard. The announcers thought it, I thought it, everybody on Twitter thought it. I had already started thinking what more I could say about Goodell and his phony crusade against concussions absolutely ruining football in my game recap when the scabs announced pass interference on Ike. Oh, okay, rage subsiding…

Until I saw the play in question. Unless Ike ate at a “sauna” before the game and the stank emanating from him was so powerful it disrupted the receiver’s concentration, I cannot fathom how he interfered with anybody. Other than a moments worth of jostling out of the break, he was a good three feet away from Santonio Holmes the entire time. It is undoubtedly the worst pass interference call ever made.

Now conspiracy theorists have come out with their take. The idea floating around is they wanted to flag Clark for unnecessary roughness but somebody on the crew realized there was nothing wrong with his hit. So rather than pick up the flag (which YOU CAN DO, scab refs), someone decided to simply pin the blame on Ike and hope nobody noticed. That might work in the Lingerie Football League where everybody is busy checking for a wardrobe malfunction but not so much in the NFL. Especially in a national game with approximately 65 hi-def cameras present. Normally I don’t buy these crackpot theories but what other explanation is there?

While that was the most egregious error, there were plenty more. The pic above was Rex Ryan’s face after he lost a challenge on whether Isaac Redman fumbled in the midst of that epic 10 minute game-sealing drive. Certainly an argument could be made although I don’t think you could automatically assume the regular refs would’ve called fumble because it was very close. Where the replacements did screw up was the entire play was supposed to be reviewed, not just the challenged part, and by doing that they would’ve seen the play was dead when Redman’s knee hit down behind the line of scrimmage. Guess they were too busy going over illegal formations to learn the proper applications of replay.

The Steelers and Jets weren’t the only victims of lousy officiating. It spread like bird flu last weekend. Cowboys linebacker and St. Clair native Sean Lee was nearly decapitated on an actual unnecessary roughness hit but no flag was thrown. Joe Flacco whined about his receivers getting mugged on every play after his piss-poor performance against Philly. Ordinarily I’d have no sympathy for him but there was no rhyme nor reason to the calls in our game either. I saw Keenan Lewis literally trip guys at the line of scrimmage and nothing get called on one play and then Ike get flagged for routine hand fighting on another. It’s a complete and utter mess and it’s going to cost some team a win, if it hasn’t already.

The NFL is America’s premiere league. They have TV contracts worth billions of dollars. I find it impossible to believe they can’t find a few million dollars to settle with the regular refs. The fact they haven’t is just example number 127 that Roger Goodell is the worst freakin’ commissioner in all of sports.