NFL Films co-founder and president Steve Sabol passed away yesterday at the age of 69. While Myron Cope was indisputably the voice of the Pittsburgh Steelers, late NFL Films narrator John Facenda provided the background vocals. For those of us too young to have experienced the Steel Dynasty of the 70s, our knowledge and appreciation of those teams is firmly rooted in the specials that NFL Films devoted to them. It can easily be argued that the work of Steve Sabol and his crew did as much as anybody to establish what we now call Steeler Nation.

They also gave the Cowboys their obnoxious “America’s Team” moniker but we’ll let that one slide.

As I’ve mentioned several times, I was born in the late 70s. I was too young to watch the Steel Dynasty and by the time I started watching football in the mid 80s, the Steelers pretty much stunk. Then one day my mom and I went to the video store and there in their bargain bin was a bunch of vhs tapes from NFL Films. I bought one about Terry Bradshaw (“Greatest Sports Legends,” natch) and another entitled “The NFL’s Best Ever Teams.” Thanks to the magic of youtube, I actually found the Steelers segment from that tape, which I posted above.

I watched that Best Teams tape dozens of times but I watched the Steelers segment probably closer to a hundred. I wore that bit of tape out to the point I still remember there was a bit of distortion and rollback  at the part where TB comically tries to block an Oiler on John Stallworth‘s reverse. You youngsters don’t know how lucky have it with your dvds and blu rays. Good grief, I’m turning into my father. 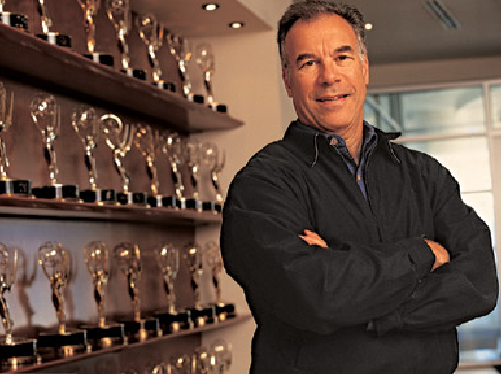 Anyway, Steve Sabol was the man responsible for that and many many other programs devoted either whole or in part to our beloved Steelers. And don’t think for one moment those programs didn’t play a major role in spreading the gospel that is the Black and Gold. I have a complete collection of NFL Films Year in Reviews for every Steelers Super Bowl team (you can get the first five in the must own Pittsburgh Steelers: The Complete History dvd collection but have to buy Road To Super Bowl XLIII separately) and rewatch them before every season or just when I feel like getting psyched up for a game. They’re a fantastic source for great memories or to simply learn a little about the history of your favorite team.

In conclusion, thank you, Steve. Thank you for the countless hours of knowledge and entertainment your work provided us. Thank you for being the preeminent chronicler of the game we follow and the team we love. You will truly be missed.  Good-bye and God Bless.