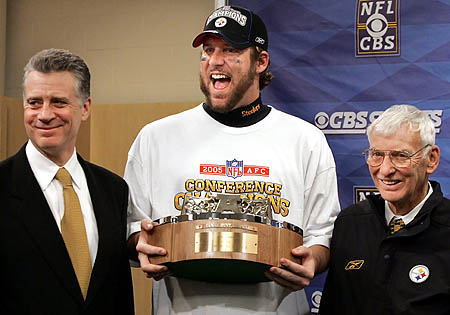 Oh what a tangled web we weave…

The Pittsburgh Steelers have long been associated with doing things “the right way.” In fact, the “right way” has frequently been referred to as the Steeler Way. Some have even dubbed it the Rooney Way. Seeing as no franchise has experienced more success than the Black and Gold, it’s a credit both management and ownership richly deserve.

However, this off-season has been a bit perplexing. Heck, the past year has been weird. From devising devious gimmicks in order to circumnavigate the NFL’s concussion policy to team president Art Rooney II dictating the firing of Bruce Arians then lying by claiming he retired, the Steelers have been behaving very un-Steelerlike. Now that even the most diehard Yinzer has started to wonder what the hell they’re doing, Deuce Rooney took to his unofficial PR staff aka the local newspapers in order to do a little damage control. The result of his interviews with the Post-Gazette and Tribune-Review only serve to paint him as more of a weasel than initially thought.

The most telling bit is how Rooney deliberately parsed his words to avoid being called a liar somewhere down the line. In both articles, he stresses several times that Mike Tomlin made the call to hire Todd Haley as the team’s new offensive coordinator. That’s all well and good except Deuce is either the densest man alive or doesn’t realize that’s only HALF of the question. The other half was who fired Arians in the first place?
Read More »Art Rooney II Says He’s A Hands-Off Owner