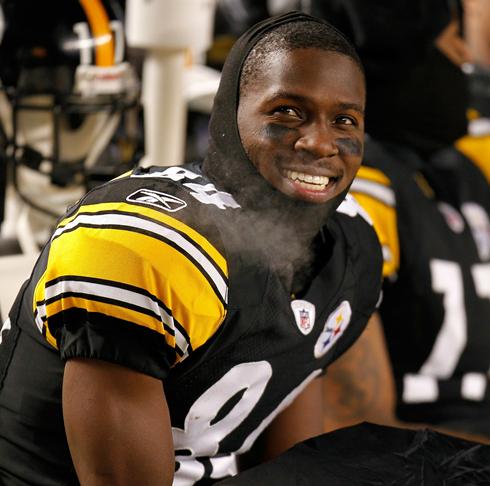 I’m sorry. Even though this blog isn’t exactly Sports Illustrated or the Wall Street Journal, I try to present thoughtful opinions and reasoned analysis in between the dorky pop culture references and blatant homerism. But Code Red literally shot from my nostrils when I heard this latest development involving the Pittsburgh Steelers. Since then, I can’t stop laughing.

The Steelers have signed wide receiver Antonio Brown to a five year $42.5 million contract extension. Antonio Brown. Not Mike Wallace, the delusional putz who thinks he’s worth Larry Fitzgerald money. Not Mike Wallace, the restricted free agent who spends all day butchering the English language on Twitter because he refuses to sign his tender and report to training camp.

Shhh… If you listen real carefully, you might be able to hear every glass in the Wallace house being thrown against a wall. I bet his aim isn’t as good as Santonio Holmes‘.  ‘Tone could part a sister’s weave with a shot glass from twenty feet away.

Brown had a break out season in 2011, becoming the first player in Steelers history to amass 1,000 receiving yards and 1,000 return yards in the same year. In only his second season, he made the Pro Bowl and was voted the team MVP by his peers. The MVP honor was particularly well-deserved as to a man Steeler coaches and players have said AB is one of the hardest workers on the team. He was slated to become a restricted free agent next year but instead will enjoy a new contract which calls for a signing bonus of $8.5 million on top of a base salary of $540,000. Next year he gets a $2.5 million roster bonus and a $2 million base salary with the roster bonus dropping off after that but his base going up to $6 million in 2014 and 2015, $8.25 million in 2016 and $8.71 million in 2017.

The Steelers lock up a promising young wide out until 2017. Brown gets long term security and $42.5 million dollars. A fair deal for both parties. See how easy it is to get a contract done when one of the people involved ISN’T AN ARROGANT DELUSIONAL JACKASS?

I, of course, speak of Mike Wallace. I have no doubt the Steelers offered this deal or one similar to it to Wallace. Or they would have if he hadn’t decided to play the “I’m an obnoxious asshole” card and held out. Handing Brown a shiny new deal while Wallace sits home playing Call Of Duty on his XBox is a giant flashing, “Screw You, Wallace!” from Steelers management.

Then again, maybe they did offer this deal to Wallace first. Perhaps he rebuffed their advances because the money was less than he desired. $42.5 million is a ton of cash to you and I but it wasn’t the “Larry Fitzgerald money” to which Wallace feels he’s entitled. For the record, LarryFitz money is 8 years $120 million.

Well, I have bad news for Mike Wallace. The Rooneys will never pay a wide receiver $15 million per year. Yancey Thigpen, Plaxico Burress, Santonio Holmes, they wanted big money, the Steelers told them to go elsewhere to get it. Dan Rooney would sooner spend $15 million on hand woven spider silk suspenders than give it to a wide receiver. Art Rooney II would sooner spend $15 million on lap dances at Blush (and that’s not easy given the quality of talent they have there) than give it to a wide receiver. The Steelers have never paid a receiver more than they paid their star quarterback or star linebacker and they NEVER EVER WILL.

Wide receivers simply aren’t worth it.

Not that anybody will ever be able to convince that raging egomaniac otherwise. Stay firm and stick to your guns, Mike! I’m sure the Steelers are hard at work scraping together that LarryFitz money you’re waiting for! Don’t worry about showing up to camp, we’ll call you when we need you!

In the meantime, Kevin Colbert and the Rooneys will be busy rewarding the guy who truly wants to wear the Black and Gold.