The Black and Gold got off to a fast start, scoring touchdowns on their first two drives of the afternoon. The first drive concluded with Ben Roethlisberger scrambling away from danger and finding Jerricho Cotchery in the end zone for his first Steeler TD. The Cotch Rocket would later have another TD wiped off the board on a similar catch-and-run. I hate to belabor this point since it makes me sound like a Hines Ward hater, which I’m definitely not, but why is this guy not playing more? Hines, who spent almost the entire game on the sideline, caught one ball for 10 yards as it appears his career is quickly reaching an end.
END_OF_DOCUMENT_TOKEN_TO_BE_REPLACED 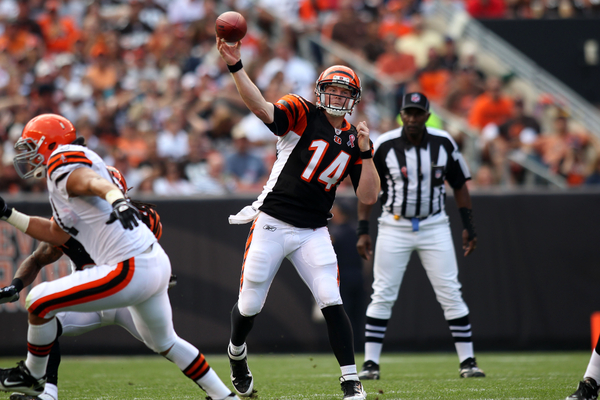 This weekend, the Pittsburgh Steelers face the Cincinnati Bengals in a crucial AFC match-up. Unfortunately, most of you who live out-of-state will have to fire up the satellite dish or visit your favorite Steeler bar in order to watch since it’s neither a national nor prime time game. In fact, all Bengal games start at one o’clock because they have to be indoors before curfew as a condition of parole.

Anyway, when last we left Cincy, franchise quarterback Carson Palmer was saying he’d rather retire than strap on their orange jumpsuit ever again. Hardheaded GM/Owner Mike Brown eventually traded him to the desperate Oakland Raiders which for Palmer must have been like being handed a Get Out Of Jail Free card. The haul in return was impressive, a first rounder and a second that becomes a first if the Raiduhs win a playoff game, which I’m sure Cincy will use to augment their team with the best available criminals in next year’s draft.
END_OF_DOCUMENT_TOKEN_TO_BE_REPLACED