Which is Tomlinspeak for “He don’t know the playbook.” END_OF_DOCUMENT_TOKEN_TO_BE_REPLACED 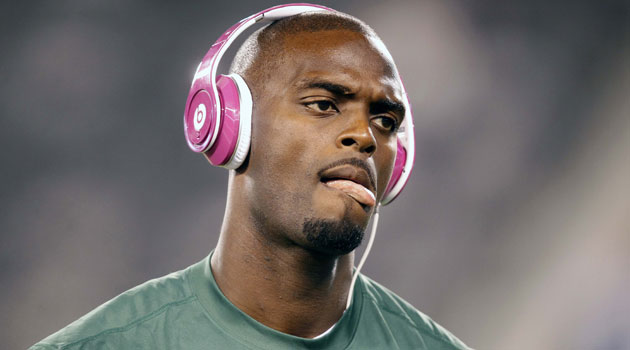 Later tonight, the Pittsburgh Steelers kick off the pre-season with their annual Battle of Pennsylvania against the Philadelphia Eagles. It’ll be our first look at the Black and Gold since that cold Denver night so many months ago. One person we won’t be seeing is wide receiver Mike Wallace, who continues his ill-advised hold out. The Steelers will some how have to find another receiver to make up the 3 catches for 26 yards he contributed in the Mile High disaster.

Welcome to another installment of Wallace Watch.

While Wallace has checked out physically by refusing to sign his tender and report to camp, Steelers management has begun checking out mentally in terms of wanting to negotiate with him. GM Kevin Colbert told a local radio station that he hasn’t talked with Wallace recently and doesn’t plan to until the selfish idiot signs his damn tender and shows up to work. Gerry Dulac of the P-G is also reporting that Wallace has lost all support from Mike Tomlin, who’s no longer pushing management to sign the wide out to a long term deal. When you’ve lost Tomlin, perhaps the biggest player’s coach in the NFL, you know you’ve done stepped in it.

Despite negotiations seemingly at an impasse, Colbert also reiterated he has no intention of trading Wallace. Nor should he. I’m not going to repeat what I’ve written time after time but the Steelers aren’t the ones over the barrel here. Wallace owes the Steelers one more year at his tender price before he can become an unrestricted free agent. Until he shows up and fulfills his obligations, he’s not going anywhere. Mike Florio at PFT floated the insane idea that the Steelers could pull the tender, thereby rendering him a UFA, and apply that money to signing a veteran wide receiver. Yeah, that’s how you deal with an asshole; give him exactly what he wants.

Besides, what veteran receiver could the Steelers possibly sign?

Yes, word has surfaced that the Steelers have been kicking the tires of ex-Steeler Plaxico Burress. There’s no doubt they had great interest in bringing Plax back last summer when he was first released from jail. Their interest waned quickly when a bidding war broke out with the dumbass Jets swooping in at the eleventh hour to sign Burress to a one year $3 million deal. The Steelers would want a deal more in line with what they gave Jerricho Cotchery (two years, $1.5 million per) which may not be doable with Plax facing a number of debts. Then again, nobody has shown much interest in Plax this off-season so beggars can’t always be choosers.

Would the Steelers be interested in trading one headcase wide receiver for another? Well, let’s make one thing clear: Plax isn’t Mike Wallace. Wallace is a big play threat who stretches the field while Plax is more or less a possession receiver at this point in his career. Where Burress would excel is as a red zone threat. Last season he caught 45 balls for only 600 yards but he snagged 8 touchdowns, the exact same number as Wallace, who caught twice as many passes and had twice as many yards. At 6’5 230, Plax has the kind of size that makes him nearly impossible to cover on jump balls in the end zone.

Considering red zone offense was one area the Steelers were woefully inept last season, having another big galoot out there is enticing. When you think of the success the Patriots had with Gronk and Aaron Hernandez, imagine how awesome it would be if the Steelers had their own Jolly Green Giant package with Plax, Heath, and/or Wes Saunders. Plus, we know Ben has wanted a big target for awhile now. Why not give your star QB what he wants, especially since Hines Ward is no longer here to moan about it?

Of course, PFT reported the Plax rumor as solid because it was tweeted by Uncle Eddy at the P-G, which all Yinzers know is laughable because ESPN’s Adam Schefter and John Clayton (who used to cover the Steelers beat once upon a time) have gotten way more scoops than Bouchette ever has. I will say this much for the rumor, though, the P-G (as all Pittsburgh media) has been and always will be a PR tool for the Steelers. As such, the beat writers usually report what the team wants them to report so if they’re talking about a “rumor” that Plax is on their radar, chances are somebody in the front office wants that story out there.

You know, I love football. I mean, why else would a normally sane man devote hours and hours of his free time to blogging about his favorite team instead of engaging in more productive activities such as pwning fools on Call of Duty or treating his girlfriend to a five star evening at Dave & Busters? Still, even I have to shake my head in wonder sometimes. I realize we’ve entered that traditional dead zone after free agency and before the draft where football news (and, as a result, my blog posts) slows to a trickle but are NFL fans really jonesing so badly for a hit of their favorite sport that Nike unveiling their take on the league’s official uniforms is major news?

If the Mayans were correct and the end of civilization is upon us, I can’t help but think future historians from the planet Betelgeus will someday find a tape of Tuesday’s spectacle and think, “Yep, they got what’s coming to them.” Granted, when it comes to Nike, I expect nothing less than full-on spectacle. This is, after-all, the company that buys athletes, coaches, colleges, arenas and everything else under the sun then proceeds to market the hell out of it with “attitude.” So naturally when Nike was contracted to be the NFL’s official uniform supplier, they couldn’t just debut their line during the pre-season when the players first take the field. Nope, they had to bring in a representative from every team, trot them out in full regalia, and have them parade around and answer questions like a Bizarro Miss Universe contest.

The video above gives you the basic idea of what went down. Unfortunately, the dorky looking Jimmy Olsen clone has some bizarre jealousy towards Ben Roethlisberger so we don’t get any of Big Ben’s sartorial wisdom but you still get a good look at the new Pittsburgh Steelers unis. Which is to say, the exact same uniforms they’ve worn for the past forty years. As my fashion sense is best summed up by a drawer full of Affliction t-shirts, I direct those that care about such things to UniWatch, who analyzed what specific “improvements” Nike made to each team. To be fair, I understand why many NFL fans were so eager to see Nike’s designs since Nike’s uniform department is primarily known for two things; hideous ArenaBall style unis that they think look “futuristic” and black alternate jerseys for teams whose colors aren’t ordinarily black (gotta get a piece of that lucrative gang banger market!).

Anyway, from one non-football story to another. I regret to inform my four female readers that the Steelers made a minor addition to their great off-season Purge – let’s call it a Spit-Up – by cutting ties with punter Dreamy Daniel Sepulveda. They didn’t exactly cut Seppy, he’s a free agent who was simply told they had no interest in re-signing, although the effect is the same. Sepulveda was a fourth round draft pick back in 2007 who suffered one season ending injury after the other throughout his disappointing career. In 2008, it was a torn ACL, his ACL went kablooey again in 2010, while last year he simply tore the cartilage in his knee.

I still can’t get over Kevin Colbert drafting Sepulveda in the FOURTH ROUND?!?! If you’re going to waste a draft pick on a non-football player, at least spend it on something worthwhile like Jacksonville’s awesome mascot or the semi-hot Bengals cheerleader accused of boinking a high school student. Punters and kickers should never ever be drafted because the purpose of the draft is to procure football players. You could go to a local high school and find a kid capable of doing what the average kicker or punter does. The career difference in average yards per punt between Sepulveda, a mid-round draft pick and two time college punter of the year, and his replacement, the undrafted Jeremy Kapinos, is .5 yards. POINT FIVE YARDS.

And before anybody says, “Geez, Chris, relax. It was a fourth round pick,” ever hear of a guy named Antonio Brown? He was picked in the sixth round.