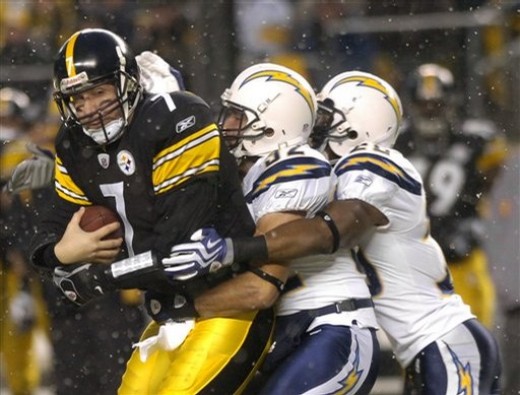 The Steelers entered the day approximately $10 million over the salary cap.  To get within range, they released Antwaan Randle-El and Max Starks.   ARE is no surprise what with the emergence of rookies Antonio Brown and Emmanuel Sanders.  Starks, however, has been the team’s starting left tackle and Franchise player over the past couple seasons.  He did suffer a herniated disc in his neck necessitating season-ending surgery last year so perhaps he has not sufficiently recovered.  Or maybe the Steelers feel they can re-sign him at a lower price with the injury discouraging other teams from showing interest.

Meanwhile, the Steelers re-signed free agent tackle Willie Colon to a five year $29 million contract.  Shockingly, they weren’t even the highest bidders with Colon turning down an offer of $3 million more from the Bears in order to stay in the Black and Gold.  While I’m happy with my Italian genetics which predispose me toward the swarthy good looks and baby blue eyes which make all the ladies swoon, I would happily trade them for those which imbue me with the ability to be a tall, fat, uncoordinated sloth.

TWENTY-NINE MILLION?   WHAT MADNESS IS THIS?

In their defense, the Steelers have long said Colon is the best RT in football.  Some fans and media types also believe this no doubt proving Goebbels theory that if you repeat a lie often enough people believe it to be true.  Colon beat out Starks for the starting RT job in 2007.  In the three years since, the Steelers have given up an ungodly number of sacks, many of them coming from the right side.  He missed all of last season after tearing his achilles during OTAs and to be honest I barely noticed his absence with Flozell Adams around.

Scott, by the way, also inked a brand new two year deal with the Steelers.  If they don’t re-sign Max, it looks like he’ll be given the first shot at winning the LT spot.  He was pressed into duty over there last year and to say he struggled would be putting it mildly.  To be fair, by the time the playoffs rolled around Scott showed marked improvement.  With Bruce Arians’ Flying Circus offense back this season, I’m not sure I feel comfortable betting that wasn’t a fluke.