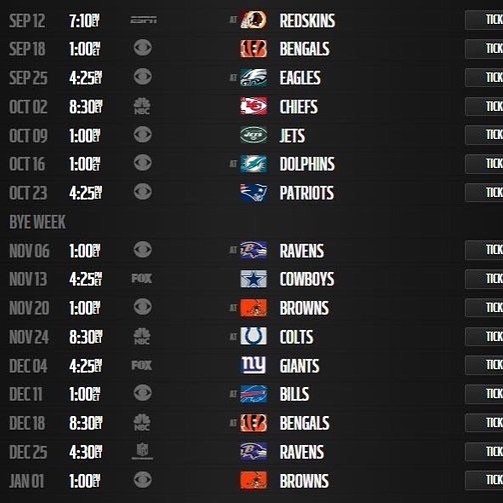 The NFL released the Pittsburgh Steelers 2016 schedule and all I gotta say is I hope your entire family are Steeler fans. If not, well, there’s gonna be some awkward family dinners. The Black and Gold have not one, not two, but three holiday games this year. Of course they’re only the second team in NFL history to be bestowed such an “honor.”

For the second time in three years, the Steelers have been chosen to play the “at-large” (ie non Lions or Cowboys) Thanksgiving primetime game – against the Colts. Christmas falls on a Sunday this year which means the NFL traditionally schedules that week’s slate on Saturday to give the players time with their families. Except the Steelers, who get to face the Ravens in one of two Christmas games. Talk about finding a lump of coal in your stocking. A week later, everybody plays (hungover) on New Years.

The Turkey Day rumble is on the road but both yuletide games are at home. This might be a cause for concern for any other franchise but Steeler Nation are the most hardcore fans in sports. Last time the Steelers played a home game on a holiday was New Years 2011 and there were only 650 no shows at Heinz Field. There might be a few more than that on Christmas but I don’t expect the stadium to be half empty for either game unless we’re 2-12 or something.

In addition to the holiday games, the Steelers have their typical full allotment of primetime games with two more Sunday Night match-ups on NBC as well as kicking off the season in the first Monday Night game against Washington. There’s also a smattering of nationally televised 4:30 starts on Fox and NBC. Surprisingly, the week 2 rematch with the Bengals, their first meeting since the Wild Card Bloodbath, wasn’t picked up for national tv. Still, for those of you who live out of state and/or are too cheap to buy DirectTV or visit a Steeler Bar, you’ll have plenty of chances to watch your favorite team from the comfort of your own couch.