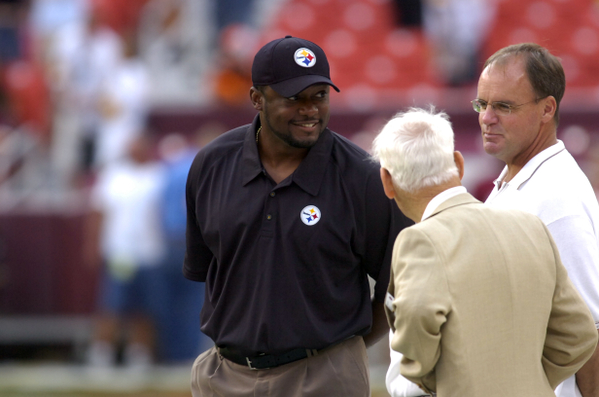 The Pittsburgh Steelers have holes.  Okay, maybe not huge Parkway West size pot holes but they are dangerously thin in terms of depth.  Unfortunately, nobody seems interested in becoming a Steeler.

Former Cincinnati Bengals tight end Reggie Kelly came in for a visit yesterday.  And then left just as quickly as he came.  Over the weekend, wide receiver Jerricho Cotchery also popped in for a quick hello.  He, too, rejoined the ranks of the unemployed shortly thereafter.

Perhaps both players failed to impress the coaching staff.  If that’s the case, then in [intlink id=”23″ type=”category”]Kevin Colbert [/intlink]We Trust.  However, looking at the Steeler’s depth chart, it sure looks like either man would make a nice addition.  Neither are bold faced superstars but at this point beggars can’t be choosers.

Matt Spaeth signed with da Bears in free agency.  Which leaves David Johnson and a whole lot of nothing as possible back-ups to Heath Miller.  [intlink id=”31″ type=”category”]Bruce Arians[/intlink]’ offense is very tight end dependent, preferring two tight end sets in favor of the traditional fullback led I formation, although Johnson’s primary role has been as an H-back.  So who is the team’s second blocking tight end?   At this point, former Tampa Bay Buc tight end John Gilmore is probably the front-runner but he’s hardly a known quantity.

Worse yet is the situation at wide receiver.  [intlink id=”81″ type=”category”]Emmanuel Sanders [/intlink]is coming off two foot surgeries and [intlink id=”34″ type=”category”]Hines Ward[/intlink] is battling injury and age.  The Steelers tried wooing Plaxico Burress and when that fell through turned to Cotchery.  With neither men signed, who are the fallback options?  Wes Lyons?  Limas Sweed?

Those are just two of the positions they tried filling in recent days.  We still have to worry about the offensive line, where presumptive LT[intlink id=”85″ type=”category”] Jonathan Scott [/intlink]and incumbent LG [intlink id=”85″ type=”category”]Chris Kemoeatu[/intlink] have both been sitting out with injuries.  Who backs them up?  Max Starks’ career seems to be over but Flozell Adams is still sitting out there.  The Steelers wanted to keep him at a lower price but he refused to renegotiate.

Naturally, it all comes down to money.  The feverish contract renegotiations over the past month have gotten the Steelers roughly $2.5 million under the salary cap.  That’s barely enough to make it rain at a decent strip club.  The Steelers have done a good job of bringing in veterans desperate to make one last run in recent years but with the shortened off-season, dumpster diving may be more difficult this year.

Keep your fingers crossed, keep those rabbit’s feet nearby and don’t walk under any ladders.  While the Black and Gold still field two outstanding starting units, they’re a veteran-heavy bunch prone to injuries.  When a player goes down, [intlink id=”86″ type=”category”]Mike Tomlin[/intlink] is fond of saying, “Next man up.  Our expectations don’t change.”  Let’s hope when injuries do occur, those players are able to fulfill those expectations.