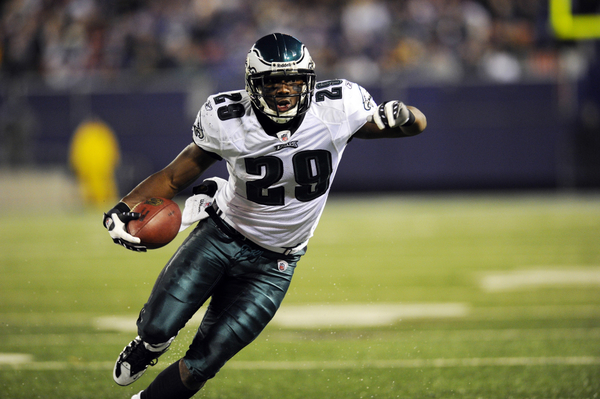 I love preseason champions.  Every year, the Redskins or the Cowboys add a bunch of flashy big-name free agents and then fall on their asses once real football starts being played.  The Patriots have also joined that club, adding Fat Albert Haynesworth and Chad OchoJohn.  Anything to distract from the fact they haven’t won a playoff game since SpyGate broke, I guess.  Did you know when I wrote for NFL.com as part of an exchange those doofuses at FanSided set up, I was given explicit instructions that I could never ever mention SpyGate in any of my articles?

Anyway, I guess there are some interesting subplots to tonight’s game.  The Battle of Pennsylvania!   Shady McCoy returns to the scene of his greatest glory!  If by “glory” you mean “Beating Rutgers.”  They also have Dion Lewis which sorta makes them a halfway home for ex-Fighting Wannstaches. Sadly for him, they went out and signed former Dolphin Ronnie Brown as Shady’s primary back-up.

Also, Mike Vick comes to Heinz Field!  Too bad the Pirates are off because tonight would have been a great time to hold a Bark At The Park promotion.  Now that the media has decided Vick is really a swell guy despite the fact he drugged, raped and mutilated defenseless animals, I’m sure we’ll hear a lot about his redemption.  What you won’t hear about is this upcoming GQ interview where he says, among other things:

“You got the family dog and the white picket fence, and you just think that’s all there is. Some of us had to grow up in poverty-stricken urban neighborhoods, and we just had to adapt to our environment. I know that it’s wrong. But people act like it’s some crazy thing they never heard of. They don’t know.”

You hear that, Whitey?  He’s a poor black kid from the hood.  You just don’t understand how going to college on a full scholarship and then signing a multi-million dollar contract backs a kid into a corner.  Into a corner where his only way out is to methodically buy a shack in a deep dark isolated stretch of land, then stock it with dogs that you abuse and neglect until they’re willing to fight to the death for your sick amusement.

Anyway, let’s talk about the Steelers a bit instead of overrated assholes.  The secondary is currently ravaged by injury.  [intlink id=”101″ type=”category”]Ike Taylor[/intlink] is out with his broken digit while Crezdon Butler, [intlink id=”96″ type=”category”]Bryant McFadden[/intlink] and  Cortez Allen are all nursing sore hammys.  The depth is so shallow right now, the team has been forced to dumpster dive for castoffs like Kevin Dockery and Macho Harris.

Dockery played three seasons for the Giants before moving on to the Rams last year.  He’s a journeyman in the Anthony Madison mold.  Macho Harris is a former Eagle, starting for them in 2009.  Last season, he spent time with the Skins before being released.  He was a corner in college but has played safety in the pros.

To make room on the roster, free agent TE Eugene Bright and DT Sunny Harris were released.  Bright is no surprise but the Steelers were initially high on the youngster Harris.  But when you consider they have a safety named Macho and a corner named Tuff, there’s just no place for a guy called Sunny.

A few things to keep an eye on tonight.  [intlink id=”81″ type=”category”]Jerricho Cotchery[/intlink] will see his first action in the Black and Gold.  He’ll be battling Antonio Brown for the slot job until Emmanuel Sanders gets healthy.  Tony Hills, Chris Scott and Ramon Foster are in a three way battle for starting RG.  Whomever sucks the least will likely get it.  Finally, Dennis Dixon better show a little more than he showed last week.  I have to wonder if the Steelers are going to keep four QBs as it is.  If Dix plays like he did last week, he may make that decision a whole lot easier.