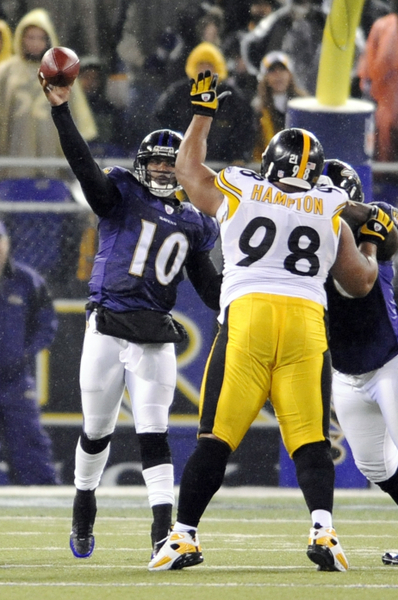 Which is why the Pittsburgh Steelers rivalry with the [intlink id=”141″ type=”category”]Baltimore Ravens[/intlink] is so refreshing.  The teams hate each other and they aren’t shy about it.  Terrell Suggs famously showed up to training camp wearing a shirt which proclaimed his hatred of the Steelers. Ray Lewis crowed about the “bounties” collected for taking out certain Steelers, most notably [intlink id=”34″ type=”category”]Hines Ward[/intlink].  More recently, the teams spent the entire off-season sniping at each other in 140 characters or less on Twitter, culminating in [intlink id=”60″ type=”category”]Ryan Clark[/intlink] stating the rivalry “isn’t really a rivalry” until the Ravens actually win a game.  An infuriated Baltimore coach Jim Harbaugh angrily responded, “I don’t care what Ryan Clark says about anything.”

Since Ben Roethlisberger’s arrival in Pittsburgh, the Steelers are 7-5 against the Ratbirds.  However, only two of those losses are with Big Ben behind center (both occurring in 2006 when Ben was still hampered by having his brain scrambled in his motorcycle accident).  Since then, Ben is a perfect 8-0 against Baltimore including two post-season victories.  This leads credence to [intlink id=”70″ type=”category”]LaMarr Woodley[/intlink]’s prophetic vision that the Ravens will never win a championship during his (playing) lifetime because try as they might, they simply can’t beat Ben.