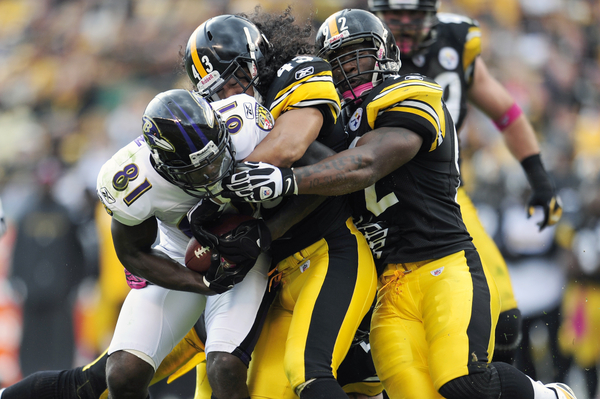 When one team dominates a rivalry, there is a tendency for the little brother to go out and focus all their efforts on getting over that hurdle.  Some teams even go to the extreme of making over their roster specifically to beat their inter-divisional rival.  The Jets are the most recent example, as they loaded up on elite corners and stressed a ball-control offense in a single-minded effort to counteract the New England Patriots.

This off-season, the Ravens underwent a similar transformation.  They brought in a new defensive coordinator Chuck Pagano after their old one left to become the D-coordinator for the University of Michigan.  Pagano, a secondary coach by nature, will be unveiling a totally revamped secondary.  Rookie corner Jimmy Smith, the team’s first round pick, is expected to start on Sunday.  Opposite him will be third year man Cary Williams, also a cracking the starting line-up for only the second time in his career.

The Ravens focus on stopping the passing game is a direct answer to the Steelers offensive weaponry.  I can’t believe I’m saying this but the Black and Gold have the potential to be the most explosive offense in the AFC.  I’m not advocating chucking the ball 60 times a game but if Bruce Arians wants to bring the Flying Circus to town, he certainly has the personnel to run it.  To put things in perspective, Jerrico Cotchery, who was the Jets #3 last year, is this team’s FIFTH receiver.  And really sixth if you factor in Heath Miller, one of the best pass catching TE in football.

Rashard Mendenhall is a rising superstar in the backfield.  He’s backed up by the more than capable Issac Redman and veteran Mewelde Moore.  Heath Miller is an elite TE.  The team is six deep at wide receiver, led by future Hall of Famer Hines Ward and budding superstar [intlink id=”82″ type=”category”]Mike Wallace[/intlink].  And behind center we have [intlink id=”14″ type=”category”]Ben Roethlisberger[/intlink].  Big Ben had a career best 17/5 TD-to-INT ratio last season after throwing for a career best 4,000 yards the year before.  He’s clearly entering his prime and with a vast array of weapons at his disposal, he’s only going to get better.

The only thing to worry about at this point is the offensive line.  O-line coach [intlink id=”85″ type=”category”]Sean Kugler[/intlink] is fielding three new starters from the unit who took the field on opening day last year.  Although to be fair, it’s the same group that won the AFC Championship game last season and made a nice run in the Super Bowl.  Doug Legursky takes over at RG for Ramon Foster, Willie Colon is back at RT and Jonathan Scott is now protecting Ben’s blind side.  If Kugler can get this group to play at the same level as they played last season, load up on Steelers for your Fantasy Football team because this team will put up points.

Nowhere have the Ravens retooled more than on offense. Baltimore truly believes they are a Super Bowl caliber team if only they can bring their offensive output up to the Steelers’ level.  It all starts with the signal caller.  Joe Flacco is considered by many to be one of the brightest young QBs in the NFL.  Going into his fourth season, he’s dangerously close to losing that “young” addendum.  The time for granting him leeway due to his youth has passed.  If he’s truly a championship level quarterback, this is the year for him to take that next step.

The team has certainly done their part. They’ve loaded up on players in an effort to surround Bert with the best supporting cast they can offer.  The team boasts one of the finest backs in the league, Ray Rice.  They’ve also brought in veteran pothead Ricky Williams as insurance.  Receiver Anquan Boldin is coming off an 800 yard season and will be paired with veteran deep threat Lee Evans, who was acquired early in the pre-season from the Bills.

Although the additions are fine, the losses must be noted as well.  TE Todd Heap, a noted Stilla Killa, is now in Arizona.  Bruising back La’Ron McLain has taken his talents elsewhere.  And another guy who has always had the Steelers number (he caught the go-ahead TD in the Ravens week 4 victory over Chaz Batch and the Black and Gold, their last win against us), Derrick Mason, is now a Jet.

The Steelers D is a year older but nasty as ever.  It’s the same unit which dominated the NFL in every statistical category last season, save the addition of veteran DE Aaron Smith, who will likely rotate with Ziggy Hood in an effort to keep Smith healthy for an entire year for once.  The Ravens started four different offensive line combinations in four pre-season games.  They added LT Bryant McKinnie, shifting Blind Side moving star Michael Oher to right tackle.  This moved last year’s right tackle, Marshal Yanda, over to guard.  On top of all this, veteran center Matt Birk has battled injury all pre-season and has yet to take a snap in 2011.

As always, the key to the game will be mistakes.  When the Steelers pressure Bert, he’s invariably good for one or two turnovers.  If the Steelers can force those turnovers while avoiding the ragged play that marred the first half of the AFC Championship game, their superior offense should prevail.