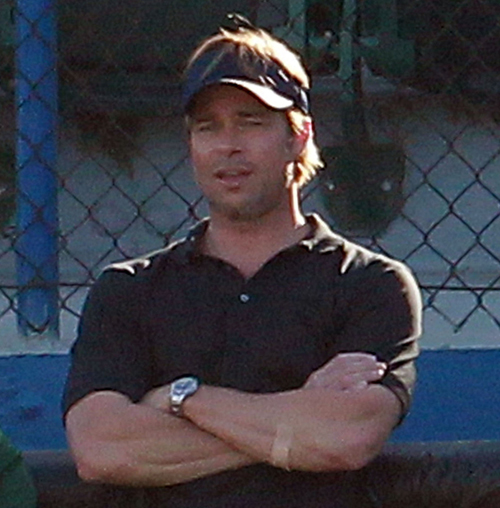 I saw Brad Pitt’s new movie Moneyball this past weekend. What else was I gonna see? Taylor Lautner running for his life through PNC Park? Not only does werewolf boy have the acting chops of Oscar the Grouch, that’s the worst strategy ever. When you’re fleeing from hitmen, you should stick to populated areas.

It was an okay flick. Certainly better than it had any right to be given the source material. I absolutely loathed the book and the cult of statheads it inspired. What kills me is the vast majority of the people who parrot these made up statistics probably never advanced beyond basic calculus. When I took a high level statistics course at Carnegie Mellon, my professor introduced himself on the very first day by saying, “I’m going to be honest with you. Statistics can be manipulated to prove anything.”

Sadly, the stathead parrots lack the education necessary to grasp this simple fact. Instead they quote WAR or EqA or BABIP like they’re actual meaningful numbers without any context or understanding of the completely arbitrary way at which they’re arrived. It’s one of the reasons I can’t stand reading most online baseball blogs. Instead of talking about what we can see with our own eyes, they spill pages and pages of digital ink repeating made up statistics which provide no actual insight.

When did a football blog become a rant about baseball and a half-assed movie review? Because not all numbers are worthless. Like most things, the KISS principle applies to sports. In baseball, there is something called run differential which is, as the name implies, the difference between runs you score and runs you give up. Teams that score a lot more runs than they give up tend to win championships while the teams that do the reverse tend to pick Pedro Alvarez.  SHOCKING, I know, but like I said, Keep It Simple, Stupid.

Point differential is also useful in football but there is a far better indicator of future success. It’s called turnover ratio. When you hear a talking head mention a team is “plus six” or “minus twelve,” they’re referring to turnover ratio. As with run differential, this number is arrived at quite simply.  You take how many turnovers a team’s defense has created and subtract the number of turnovers the offense has made. A plus number means you have more defensive turnovers than offensive ones, a negative number means your quarterback is Tony Romo.

The Pittsburgh Steelers are currently -9.

That’s the worst ratio in the NFL. To put that number in perspective, the pathetic winless Chiefs are -6.  The Jaguars and Dolphins, with one win combined, are both -3. Last season, the Super Bowl bound Steelers were +17.

Which is why I’m writing about this troubling statistic. Last season, the Steelers had the second best ratio and the Packers finished fourth (+10). The year before, the Super Bowl champion Saints finished with the NFL’s third best turnover ratio at +11. The Steelers were -3, by the way.

Over the summer, the Pittsburgh Pirates made an unexpected run at the division title. Baseball fever gripped the ‘Burgh and even I went to PNC Park to see them play rather than add to my extensive collection of bobbleheads. Even though the team was riding high, they still had a troubling run differential. As we now know, it eventually caught up with them and sent them crashing back to mediocrity.

The Steelers are 2-1. However, they have a very troubling turnover ratio. [intlink id=”86″ type=”category”]Mike Tomlin[/intlink] likes to say you are what your record says you are. Like much of what he says, his words serve better as a sound bite than actual analysis. The bottom line is if the Black and Gold don’t start bringing that number up above water, we’ll have another late-season collapse on our hands. Except this one will be by a team a lot of people actually care about.