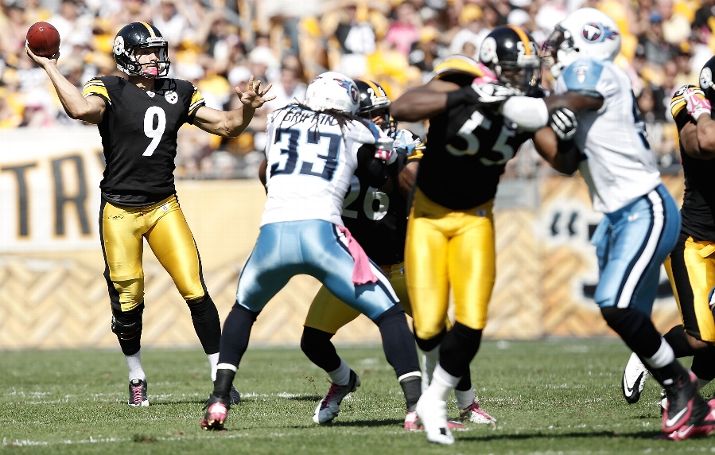 Almost half their starting defense out. Top two running backs injured and a starting quarterback who’s a limping human bruise. A never-ending revolving door along the offensive line now featuring a starting left tackle that allegedly suffered a career-ending injury last year and was only re-signed on Tuesday. Facing off against a 3-1 team with the sixth ranked defense and one of the top five running backs in the NFL.

The [intlink id=”21″ type=”category”]Pittsburgh Steelers[/intlink] completely obliterate the Tennessee Titans 38-17. Unlike previous weeks, the final score is precisely indicative of how the game actually went. To say this was the Black and Gold’s finest performance of 2011 would be a colossal understatement. To say they finally looked like the team that went to last year’s Super Bowl would be far more accurate.

Chris Johnson ripped off 21 yards on his first run of the game. He would only add 30 more the rest of the afternoon. The Steelers revamped defensive line was fantastic. Chris Hoke, in particular, was an absolute beast at nose tackle. [intlink id=”44″ type=”category”]Ziggy Hood[/intlink] and Bret Keisel also did a great job of shutting down running lanes all game long.

Meanwhile, linebacker [intlink id=”70″ type=”category”]LaMarr Woodley[/intlink] had a monster game at linebacker. I mentioned last week that the way the Steelers D is constructed, the linemen have to create gaps for the linebackers to make plays and many are attributing Woodley’s quiet year to the fact Aaron Smith has been so ineffective. There is clearly something to that as with Ziggy playing in front of him (as he did last year), Mister Woodley was back to form. He harassed Matt Hasselbeck all day, coming away with 1.5 sacks, highlighted by a play where he literally threw the offensive lineman into Hasselbeck and then dragged the quarterback down with one hand. Woodley also had the Steelers first interception of the year on a pass tipped at the line by the Diesel.

On top of the superb run defense, the secondary continued to perform well above expectations. I’m still not sold on [intlink id=”96″ type=”category”]Will.i.am Gay[/intlink] as a starting corner but I think they may have found something in [intlink id=”96″ type=”category”]Kennan Lewis[/intlink]. Lewis may be what is known as a gamer. James Harrison was cut four times because he allegedly would look confused at practice but when Joey Porter got throw out of a game, Silverback came in and played lights out. We all remember Lewis taking residence in Mike Tomlin’s doghouse last year after a pre-season debacle and he didn’t exactly distinguish himself this year either. Since pressed into the nickel role, however, he’s played extremely well.

Offensively, what can I say except [intlink id=”85″ type=”category”]Max Starks[/intlink] is my hero? I don’t know who Ben had as best man at his sham wedding but I’m sure Max would get the call if he had it to do all over again. I didn’t think one man could make that much difference although how else to explain it? There continued to be a parade of injuries with RT Marcus Gilbert and C Maurkice Pouncey both missing snaps and still they managed to limit the damage to one sack and one hit on the quarterback.

Given time to throw, [intlink id=”14″ type=”category”]Ben Roethlisberger[/intlink] tied his career high by throwing five touchdown passes, although the prettiest throw may have been uncorked by Dreamy Dan on a fake punt. [intlink id=”34″ type=”category”]Hines Ward[/intlink] (7 catches/54 yards) was the recipient of two of Ben’s touchdowns, no doubt sending Kym Johnson into orgasmic joy. I’ll need a larger sample size to confirm my hypothesis but I’m starting to think it isn’t that Hines can’t get open anymore, it’s that he takes longer to get open. When the line collapses around Ben and he has to get rid of it relatively quick, he’s forced to look elsewhere. When Ben has time, Hines is wily enough to create separation.

Other than a brainfart interception on a Chinese fire drill, Ben played nearly flawless football. Much like last season, he spread the ball around, hitting seven different receivers. A short touchdown pass to David Johnson where [intlink id=”31″ type=”category”]Bruce Arians[/intlink] insanely called for a rollout was particularly impressive when you consider Big Ben’s foot could be flown in the Macy’s Thanksgiving parade. I forgive Arians, though, because of his calling for a total FU 40 yard touchdown bomb to [intlink id=”82″ type=”category”]Mike Wallace[/intlink] late in the fourth quarter. Were this college, people would whine about him running up the score.

Considering what Lenwhale White did to the Terrible Towel a few years back, Tennessee deserves a few FU’s. Payback, she’s a bitch.

Isaac Redman only rushed 15 times for 49 yards although you had to see them to appreciate how hard he ran. No tipey toe ballet for Redzone, he got the ball and bulled into and over people, sometimes carrying the pile three or four yards with him. Jonathan Dwyer spelled him and ripped off a 76 yard run on his first carry of the season. He added 30 more on 10 additional carries which puts his average right with CJ’s. It doesn’t appear either back is more talented than Mendy but they sure run a whole helluva lot harder.

Well, I predicted the Steelers would lose which of course was brilliant reverse psychology on my part. However, if you insist I eat crow, pass over a bottle of Heinz 57 and I’ll happily do so. Being realistic, it wasn’t exactly the ’85 Bears we faced yesterday. Then again, neither were the Seahawks or Colts. And comparing yesterday’s performance with those previous wins is like comparing night and day. Hopefully, this marks the dawn of a new era of excellence.