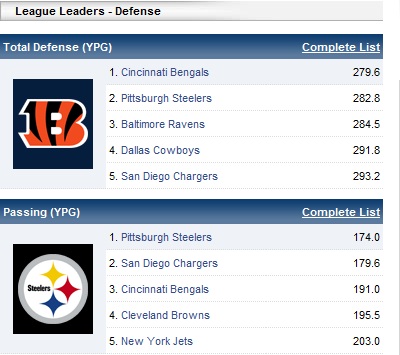 And it looks pretty brilliant in hindsight.

Asomugha has been a total bust for the 1-4 (hahahahaha) Philadelphia Eagles. Meanwhile, [intlink id=”101″ type=”category”]Ike Taylor[/intlink] is quietly putting together a fantastic season. In fact, now that Asomugha is over in the NFC, Face Me Ike may finally get the Pro Bowl recognition denied him for so many years. He certainly deserves it.

As I’ve chronicled in the past, it’s almost impossible to evaluate football in purely statistical terms. Despite what the Moneyball dorks wish to believe, it’s also hard to do so in baseball although you can to some extent because baseball boils down to a one-on-one match-up betwixt pitcher and batter. Football is too team oriented to similarly quantify outcomes. When a defense surrenders a 55 yard touchdown pass, who is at fault? The lineman for not creating gaps for the linebackers, the linebackers for not shooting the proper gap, the corner for getting beat or the safety for not providing help over the top?

However, for the sake of argument I found a website that attempted a statistical analysis of NFL corners. Ignore the first four graphs as they’re misleading. The first one simply divides times thrown at by receptions which isn’t very informative taken by itself because when you’re thrown at 29 times as opposed to 102, naturally your % is going to be higher (unless you absolutely suck). The other graphs simply divide number of snaps taken by number of times thrown at which, again, doesn’t paint a complete picture. The fourth graph, which factors in snaps AND times thrown at is a much better measure of a corner’s effectiveness.

As you see, Ike Taylor ranks 5th. A hair below the undisputed best corner in the universe, Darrelle Revis. If you look over the list, you’ll see names associated with the NFL’s best secondaries, such as Tramon Williams, Stanford Routt, and San Diego’s duo of Cason and Jammer. This, I believe, illustrates the analysis possesses some credibility. Asomugha, you may note, doesn’t even appear on the list.

When the Steelers won the Super Bowl in 2008, Ike shut down a who’s who of superstar wide receivers. Yet whenever I’d mention him as being an elite NFL CB, podcast show hosts and even some members of Steeler Nation would react incredulously. This year, you’ve barely heard his number called because teams simply don’t bother looking his way. And thanks to the fact he now has decent corners playing opposite him, the Steelers have achieved the unthinkable. They have the top pass defense in the NFL.

Maybe now Face Me Ike will finally get the credit he deserves.