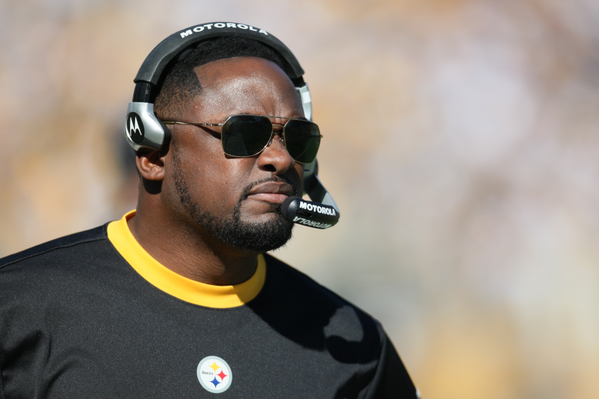 Unfortunately for Jacksonville, the foolishness isn’t limited to the men who suit up in unsightly teal, black and white every Sunday. Clearly, the reporters who cover the Jaguars fit into a clown car all their own. No wonder that miserable franchise can’t sell out a home game and will likely be packing up their truck and moving to Californ-i-a in the near future.  Provided, of course, that broke-ass state can scrounge up enough pennies to build a halfway decent stadium for them.

Man, what a depressing thought. Trading a backwater third-rate city like Jacksonville for the apathetic cesspool that is Los Angeles. That’s like being stuck between a rock and a hard place, Aron Ralston style. I wonder if Mr. Ralston followed the lead of intelligent and passionate football fans nationwide and became a full-fledged member of Steeler Nation while attending my alma mater, Carnegie Mellon.

I was not aware of this but evidently every week our head coach participates in a short Q&A with beat writers from the opposition’s city. Which is kinda cool since it affords Tomlin double the opportunity to create new meaningless platitudes and tell boldfaced lies. It’s also a little strange because it sounds like at least two reporters from Jacksonville took part in this week’s conference call. That’s approximately one reporter for every thirty fans who actually attend Jaguar games.

Anyway, this week’s session started exactly as you’d expect; with a reporter asking about the 2007 Wild Card playoffs.  Wait, what? I understand Jacksonville has been completely irrelevant to the NFL since that one miraculous playoff run four years ago. What I don’t understand is what that has to do with the Pittsburgh Steelers in 2011.

Well, Tomlin didn’t see the relevance either. The reporter obviously tried to bait him by asking if he complained to the league about the atrocious officiating which missed three separate and distinct holding calls on David Garrard’s game-winning scramble. Tomlin answered patiently then tried to steer the conversation toward more relevant matters, like things which happened in this decade. Of course, the mouthy reporter kept right on pushing which led to one of the best [intlink id=”86″ type=”category”]Tomlinisms[/intlink] of all-time:

I understand that might have been a big game in Jacksonville but that’s old news.

Oh snap! You got served, son! Flip on over before you ask your next question because that side has already gotten burned!

Many of those guys are no longer here and definitely many of the guys that were in Jacksonville are no longer there.  Anybody got any questions relative to this week?

Before a reporter could ask another insipid question, Tomlin hung up on them.

Of course, there’s no story the media likes better than one where they are the story.  So, naturally, some hayseed from Jacksonville has already posted an account of the situation on her newspaper’s blog.  Unlike the Post-Gazette, which is hiding this information behind their ridiculous pay wall when you can find it on about five other sites for free (way to go, P-G! Maybe if you hired funny, insightful, interesting writers and columnists who were born after the Kennedy administration instead of desperately clinging on to fossils like Smizik and Collier, people would pony up their ducats to read your rag), at least the Jacksonville blog is free. I suppose it would have to be, what with Florida’s unemployment rate and rampant illiteracy.

Regardless, I bring this information to you, my people, for three reasons. First, you may hear about “mean ‘ol Mike Tomlin” over the next couple days (I’m sure the Ginger Dictator is already looking into fines) because as I said, there’s nothing the media enjoys more than portraying themselves as poor put-upon victims. Second, I hope Steeler Nation realizes how lucky they are to have a team which is successful and competently enough run that we don’t have to sit around wringing our hands over events which happened nearly half a decade ago.

Finally, I posted it because Mike Tomlin is a badass. ‘Nuff said.