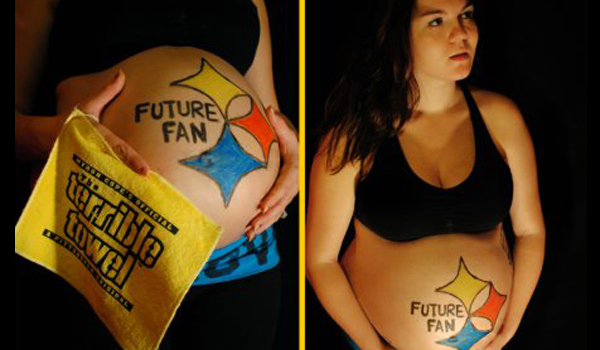 Seriously, consider the child’s mental well-being. If your little Dallas Cowboys fan was born in 1996, he’d have witnessed only one playoff victory his entire life. That’s just cruel.

I’m a fan of the [intlink id=”163″ type=”category”]Pittsburgh Steelers[/intlink]. A pretty rabid fan as friends, co-workers and family members will tell you with a heavy sigh. As a matter of fact, one of the reasons I was let go from the Site That Shall Not Be Named was they felt I was frequently too passionate in writing about my team. No wonder they replaced me with a bunch of dull carpetbaggers.

Anyway, while they may have disliked me, they would’ve hated this woman.

When I’m bored, I go on twitter to see how many of you have added me and what the various Steelers I follow are saying. Yesterday, I noticed some lady was tweeting a pic to every single Steeler on twitter. Naturally, I clicked it hoping to see boobies. Turns out it wasn’t a desperate groupie using a Terrible Towel as lingerie but rather an expectant mother who had a rather unique take on maternity photos. I would’ve tweeted her directly to compliment her on the paint job and congratulate her on expanding the Nation but her bio of “22, Blonde, Short & a Bitch” kinda scared me.

Yes, I realize I posted this under “Hot Steeler Chicks.” She is kinda hot, and not in that “glowing” way henpecked husbands frequently use to describe wives who let themselves go after they get knocked up. What the hell does that even mean? I had to categorize this post under something. No way was I starting a “Steeler MILFs” tag.

The tweet was picked up by major news sites like KissingSuzyKolber and BustedCoverage. Perhaps even Deadspin although I value my brain cells too much to click over there and check. Regardless, it was met with the typical snark usually associated with any displays of rabid fandom by [intlink id=”16″ type=”category”]Steeler Nation[/intlink]. So I figured in order to balance the karmic scales, I should post it here, where it would be appreciated.

One thing people never seem to understand about being a Steeler fan is we’re born, not converted. A lot of teams gain fans by virtue of the bandwagon effect. Those fairweather types move right along to the next team as soon as their current one falls from grace. I can honestly say I’ve never seen that happen with the Steelers. When I meet a Steeler fan from another city, whether they’re 52 or 22, almost without exception they’ve been a fan all their lives.

If you don’t believe me, take a look at this pic of a nursery at a local hospital. ‘Cause this is how we roll in the ‘Burgh. Steeler Nation: Black and Gold since the day we were born. 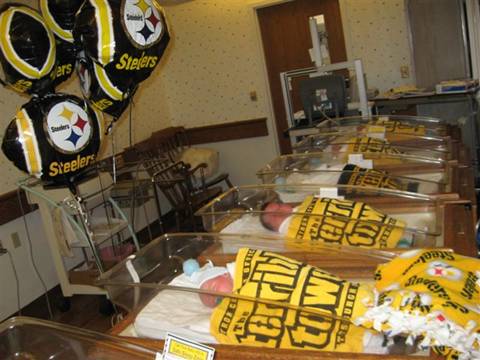