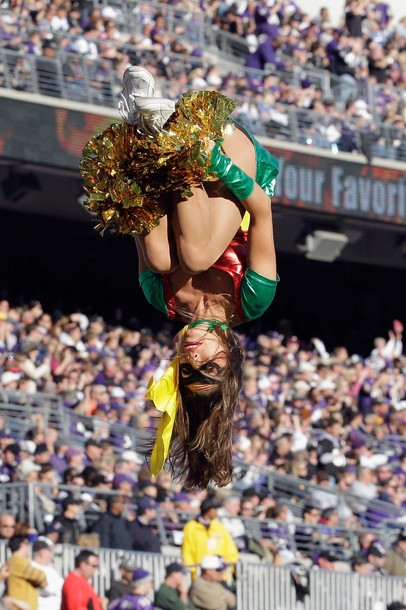 If I was from Baltimore, I’d hide my face, too. Who’d honestly enjoy cheering for a team named after a depressed alcoholic?

It’s hard to believe only two months have passed since the Baltimore Ravens and the Pittsburgh Steelers first met. When last we left the Ratbirds, they were riding high after handing the Black and Gold one of the most embarrassing losses in Steeler history. Through the first month of the season, Baltimore was 3-1 with dominating wins over both participants in last year’s AFC Championship game. Meanwhile, the Steelers were 2-2 and generally playing unimpressive uninspired football.

How quickly things change over the course of an NFL season.

In the past month, the Steelers have gone undefeated. Even more to the point, they’ve played their two best games of the year the past two weeks. Meanwhile, the Ravens went into their bye week anointed by many the odds on favorite to represent the AFC in the Super Bowl. And it almost seems like the down time disrupted whatever mojo they had working for them. Following a win over Houston, they put on one of the worst performances you’ll ever see in losing to the hapless Jacksonville Jaguars. Last week, miscues in all three phases let Arizona get out to a commanding 21 point lead before the shoddy Cardinals defense allowed the Ratbirds to mount a furious comeback.

Joe Flacco did his best impression of a competent NFL quarterback early in the season before crashing back down to earth in recent weeks. To paraphrase my hero Popeye, he yam what he yam. Since tossing three TDs against us, his statline has regressed to the norm where it currently stands at 8 TDs against 6 INTs and a completion percentage a shade over 50%. Not the worst quarterback in the league but hardly the elite signal-caller a team can depend on to go out and win them a game.

Ray Rice remains the key to the Ratbirds’ offense. Between running and catching, Rice has amassed a little over 700 yards from scrimmage this year. That puts him sixth in the NFL. The key stat, however, is that he alone has accounted for 38.1 percent of Baltimore’s offense. That puts him third, behind only Fred Jackson of the Bills and Maurice Jones-Drew of the Jags.

Rice has developed a case of fumble-itis in recent weeks which slightly mitigates his effectiveness. The Jags did a good job on him which was the key to their unexpected victory. I’m not going to pretend the Steelers are going to do the same although they did manage to limit another known Stiller-Killer (Wes Welker) a week ago. Like I said about the Patriots in last week’s preview, his dominance lies in the fact he’s simply a bad match-up for our defense.

The Ravens passing game is mediocre at best. Ike Taylor should be locked onto Anquan Boldin which takes care of him. Rookie Torrey Smith, who drops as many as he catches, is the team’s number two receiver due to Lee Evans being out with an injury. This leaves Rice and TE Ed Dickson as their primary pass catchers. Rice and Todd Heap (who is now gone) always torched the Steelers because Dick LeBeau’s defense frequently asked linebackers to cover them. This season, LeBeau has changed things up by playing a 2-3-6 set-up which puts speedy DBs on the field and takes our slow-footed linebackers off it. I don’t know if he’ll play that exact formation a whole lot since the Ravens aren’t a big passing team (not to mention the last thing they want is for Rice and Ricky Williams to gash them for 170 yards like last time) but I have faith he’ll make some adjustment to cover Rice out of the backfield.

On the injury front, it looks like my proposal to shift to a Tampa-2 will not take place after all. James Harrison has practiced normally the past couple days and if his MRI shows his eye socket has sufficiently healed, he’ll start on Sunday. LaMarr Woodley, however, has been definitely ruled out. James Farrior practiced on a limited basis, just like last week, and would seem to be a game-time decision. I believe the Steelers will go with Silverback and Jason Worilds (making his first NFL start) at OLB and move Lawrence Timmons back to his natural ILB and play him alongside Larry Foote. Timmons was a bust on the outside but inside his speed and athleticism will be of value chasing down guys like Rice. Foote, meanwhile, has shown a bit more range than Farrior and I think the Steelers will stick with him for another week.

Mistakes were the Steelers downfall in the first meeting. It’s hard to win in the NFL when you turn the ball over but when you commit SEVEN turnovers you might as well not bother showing up. Ben Roethlisberger had one of the worst games of his life, throwing three picks and fumbling twice. Rashard Mendenhall didn’t help matters with a pitiful 25 yard performance and also fumbling because he evidently can’t carry the ball and the Koran at the same time.

Of course, back in week one the Steelers were still trying to play Stiller Football. They’ve seemingly found an offensive identity and it  involves less pounding of the rock and more Flying  of the Circus. Pittsburgh Purists may not like this new strategy but you have to put the game in the hands of your best playmakers. This year, that would be Big Ben and his elite group of fast young receivers.

Young Money, by the way, will be without Manny Sanders this weekend. Sanders’ mother passed away and he’s been given the weekend to attend services. My sincerest condolences to him and his family on their loss.

While the Flying Circus worked well against an abysmal defensive team like the Patriots, the Ravens have the NFL’s third ranked pass defense (and first overall). The Cards put up points on them last week but Kevin Kolb didn’t have a particularly great game. Honestly, I have no idea how the Steelers will approach this game offensively. In Baltimore’s first loss, Matt Hasselbeck threw for 350 yards on them. In their second, Jones-Drew ran for 105. They don’t seem to have any clear-cut weakness so you just have to play to your strengths and hope your better is better than their better.

With guys like Terrell Suggs or Haloti Ngata lining up on the other side, I don’t particularly like the idea of spreading out five wide like they did last week but I have zero faith in Mendy at this point. One thing Ben did well against the Pats was take three steps and then throw, which is very un-Roethlisbergian. If Ben can be trusted to get the ball out quickly, a short controlled passing game might be the most effective route of attack. Hines Ward is expected to return to action and, while he’s been a non-factor this season, I can see him being very useful in such a scenario, especially when you consider Heath Miller will probably be kept in to block.

The first game between these two teams ended in not only blow-out loss, but in utter humiliation. Make no mistake, the Ravens knew exactly what they were doing when they ran up the score. They were exorcising some demons and sending a message to the Steelers. Well, let’s hope on Sunday night the Steelers send a message of their own.