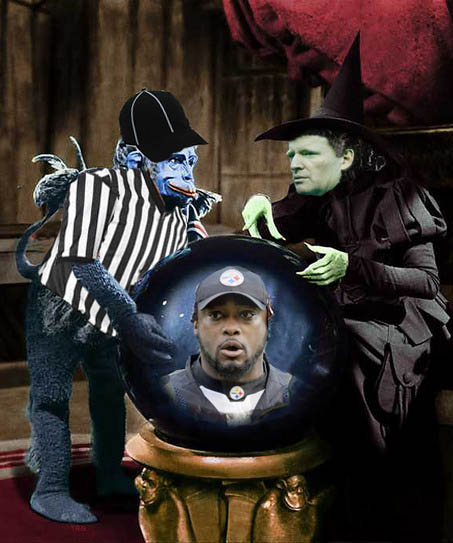 Old buddy Chris here. In my continuing effort to enjoy my own little personal bye week, I asked our pal Hennessy if he had any ideas for yet another guest commentary. In return, he had a question for me. I didn’t have an answer and the result of my ignorance is now before your beady little eyes…

Your faithful football commentators Chris and Hennessy are both stumped on this question. What determines Which Team has a bye week When? Seriously, leave a comment and drop some knowledge if you know. Every year we can’t wait to find out who we are going to play, then we eagerly await learning when we will play them (date, time and whims of NBC execs pending), and then we tune into ESPN (Lord have mercy on our souls) for commentary on the other 31 teams.

So now we know the schedule, right?

We know when to adjust our Steeler-biased fantasy team, right?

But why this week!?! Why do I have to bench Rashard Mendenhall when he has finally learned what the white line in front of the end zone means? TWICE in the SAME game!!!!!

While planning my Steeler-less Sunday, I took a look at the bye schedule.

Week  1-4 : 0 of 32 teams (expectedly)  Nobody really needs to recover except Ben and Philly

If the schedule of byes was set up to let the teams rest and heal, would:

Let’s look at what this madness has wrought. The Texans lost Matt Schaub ONE WEEK before he had a chance to heal up. New Orleans proved they are capable of sustaining excellence as efficiently as their levies can hold up in a hurricane. Too soon? And Indy, well, they pulled off a Tomlin-esque misinformation campaign on the health of their only asset. Now the only race they’re resting up for is the “Suck For Luck” sweepstakes.

Then there are the Pittsburgh Steelers. Ginger and his schedule-making monkeys thought they could predict the future with the bye week scheduling but the only person benefiting is Big Ben and his broken thumb. Although, weird as it is to say, I’m actually excited to see the splint and glove that won us number five back on the same hand. Look up 2005, we celebrated.

Has anyone else heard, “Pittsburgh Steelers vs. Kansas City Chiefs is still scheduled for week twelve of Sunday Night Football?” I know I have. I hoped to be home in Pittsburgh for the holiday, to slaughter a turkey, and then watch my team slaughter a few Chiefs before heading back to Nashville. Silly me. I should have known better than leave my plans in the hands of the Ginger Dictator and his television dollar-feeding whores!!!