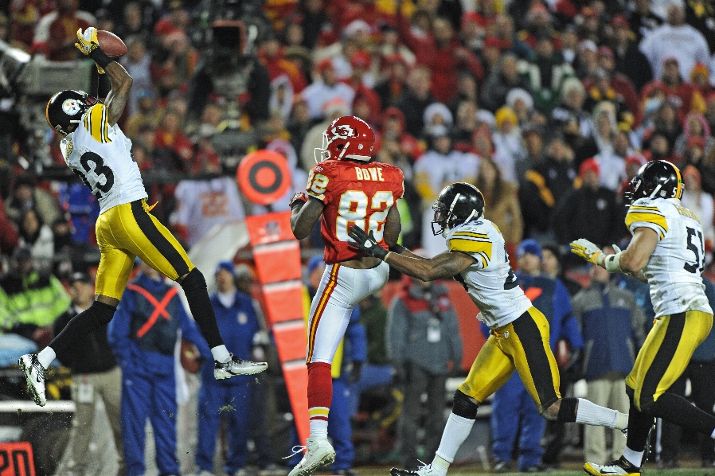 Considering the “pass” he intercepted more closely resembled a punt, I would expect Face Me Ike’s next one to occur sometime around 2013.

This game should’ve been over by halftime. The Chiefs drove down the field but settled for a field goal on their first possession. The Steelers answered by marching to the KC 8. On first and goal, Mike Wallace was wide open in the back of the end zone but dropped an easy catch. The Flash, one of the players at the center of the pre-game scrum, had an absolutely miserable game, catching only two passes for 17 yards. After Wallace’s drop, Mewelde Moore got hit from behind on a goaline carry and the Chiefs recovered the fumble.

The Chiefs next three possessions ended with a fumbled snap and two interceptions. The Steelers managed only 10 points from the those gifts. A combination of penalties and an inability to protect Ben Roethlisberger repeatedly stalled drives. The Chiefs only had one sack but that’s misleading as Big Ben’s moose strength allowed him to escape about five or six others. Losing center Maurkice Pouncey to the stomach flu didn’t help matters.

Even when the line gave Ben adequate protection, the Flying Circus never seemed to get on track. The vaunted Steeler offense managed only 290 yards of total offense and was completely shut out in the second half. Some are going to question whether Ben’s broken thumb affected his play but he finished 21 of 31 for 193 yards 1/1 despite getting almost no help from his receivers. In addition to the end zone drop, Ben hit Wallace with at least two other perfect passes, one of which was a deep ball where Flash had nothing but green grass ahead of him, and Wallace couldn’t come down with any of them. Manny Sanders, Antonio Brown and even normally sure-handed Heath Miller dropped catches they’d usually make.

With the Circus stalling, the offense was sunk because they surely couldn’t expect anything out of the running game. Rashard Mendenhall (17 carries for 57 yards) had a couple nice runs but too often fell back into his bad habit of dancing around the line of scrimmage. Redzone Redman had only 3 carries for 22 yards despite being statistically the team’s best short yardage back. Double M would only have one more carry after his ill-fated end zone plunge. The Steelers tried to run out the clock and get the hell out of Dodge in the fourth quarter but the lack of running game thwarted that plan.

Former Pitt Panthers quarterback Tyler Palko started driving on a tired Steeler D late in the game. Fellow former Panther Jon Baldwin, who inexplicably saw limited action yesterday despite appearing to be the team’s best big play threat, caught a 20 yarder to set KC up for a field goal. On fourth and 2 from the Pittsburgh 22, coach Todd Haley decided to kick the three instead of going for a conversion and possible game tying touchdown. After a three and out by the Steelers, Palko drove them right down the field until Keenan Lewis mercifully ended the game with a fantastic leaping pick on a ball Dwayne Bowe made absolutely no effort to catch.

If Haley’s testicles hadn’t shriveled up, an already uncomfortably close game might have become downright disastrous. Apologists will say “a win is a win” or in Tomlinspeak “Style points don’t matter” but the problem with letting teams hang around and hang around is all it takes is one brainfart on special teams or one flukey turnover on offense and a sure-fire win becomes a soul-crushing loss. At the end of the day, the Steelers have beaten the teams they were supposed to beat (unlike, say, the Baltimore Ravens) even if they frequently play down to the level of opposition. I guess after the past month or so when the Steelers seemed to finally be firing on all cylinders, I simply expected them to play with a bit more polish than what we saw yesterday.

One thing is for certain, a sloppy effort like last night will not get it done next week against the Cincinnati Bengals. The Bengals held on to beat the Cleveland Browns yesterday afternoon setting up another crucial game between the historic rivals. Despite both teams currently holding the AFC’s Wild Card slots, I still think only one Wild Card will come from the AFC North. If the Steelers sweep the season series, they’ll basically have that slot wrapped up. However, if we see a repeat of last night’s performance, the Bengals could easily pull out a win and then the final month of the season becomes an absolute crapshot. Let’s hope Mike Tomlin and the rest of the Steelers staff puts some boots to asses in practice so the team comes out ready to play next Sunday.