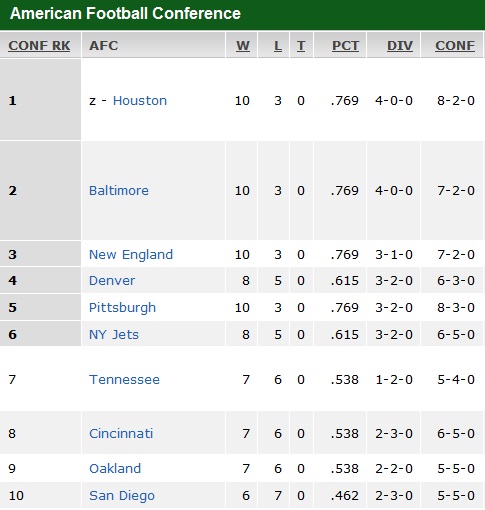 A Sunday isn’t a Sunday without the Pittsburgh Steelers. Unlike the last time I had a weekend without my beloved Black and Gold, at least my computer didn’t seize the opportunity to give me the middle finger. In fact, I was able to enjoy a stress-free Sunday of NFL action. And in the process it gave me a chance to size up the AFC Playoff picture.

It appears that Tim Tebow is a man of destiny. And that destiny is placing him and his Denver Broncos on a collision course with the Steelers.

The Steelers currently sit at 10-3, the same record as the Baltimore Ravens. I didn’t bother watching the Ratbirds this week because everybody knew they were going to hammer the gutless Colts. Instead, I kept an eye on our other AFC North rival, the Cincinnati Bengals. Cincy lost a heartbreaker to the Houston Texans when somebody named TJ Yates led Houston 80 yards in the final two minutes to score the game-winning touchdown. The loss was killer as it dropped the Bengals from the second Wild Card slot to a game behind the New York Jets. I know that box I posted above says they’re also behind the Titans but that’s only if they finish in a three tie as Cincy holds the head-to-head advantage after beating them a few weeks back.

Regardless, the playoff scenario looks great for the Steelers. One more win will clinch at least a Wild Card berth. With 11 wins, the worst that could happen is we end up tied with the Jets. Since we didn’t play them this year, the first tiebreaker would be conference record. The Steelers only have one more AFC game left on their schedule (against the Browns in the final week) so there is no way for the Jets to match our AFC record. If, for some inexplicable reason, the Steelers were to lose out in their final three games, they’d probably still make the playoffs despite being tied with Cincy, Tennessee, and/or Oakland. That’s because they hold tiebreakers over all of them by virtue of beating the Bengals (twice) and Tennessee head-to-head and having a better conference record than all three.

The highlight of this weekend was easily the Denver Broncos rallying from 10 points down with no timeouts and less than five minutes left to tie the game on a 59 yard field goal, then pull out the win in overtime. Denver has a tough match-up against the Patriots next week but they finish with very winnable games against the slumping Chiefs and Bills. The Raiders, meanwhile, must face the Lions and Chargers. The Broncos currently hold the tiebreakers if the two teams were to end up tied.

Assuming the playoff situation holds as it currently stands, it would appear the Steelers are destined to meet the AFC West Champions. I know, I know, it’s ridiculous that a 3-4 loss team will be playing on the road at a 6-7 loss team but that’s the NFL. Regardless of who sneaks in as the second Wild Card, it’s highly unlikely the AFC West winner will catch any of the 10-3 teams. Which means they will get the highest seeded Wild Card, who, as I outlined, is likely the Steelers.

I’m not going to lie, this is not an ideal playoff scenario for the Black and Gold. For one, with all the injures we’ve accumulated, I would really like the bye. Barring that, it’s a pick your poison situation where the Steelers are faced with either traveling out to the west coast to play at the Black Hole (never a fun time) or trip to the Mile High City (ditto). Given my druthers, I’d much rather face the Raiders since I don’t sweat Carson Palmer, even without Kimo around to SWEEP THE LEG.

But if we have to face Tim Tebow? I know Steeler Nation doesn’t like to hear this but the more I watch him, the more I’m convinced he’s the second coming. No, not of Him but of Ben Roethlisberger. He’s an unconventional sandlot style quarterback who has an uncanny knack for pulling out wins. With all due respect to Aaron Rodgers and Dreamboat, Big Ben is easily the most clutch QB in the NFL, a distinction Tebow is quickly making his own. Besides, the Broncos are winning with a ferocious defense and great running game that takes a lot of pressure off their young play-making quarterback.

Make no mistake, the Steelers are a better team. But as we learned back in 2005, once you get in the tournament, anything can happen. And when you’re a team of destiny, as we were then and the Broncos appear to be this year, strange things can happen. I for damn sure don’t want to be on the other end of a missed field goal or shoestring tackle by a quarterback.