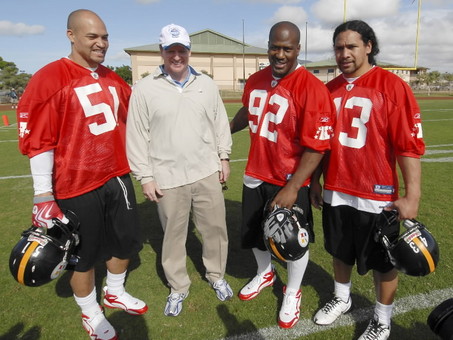 The NFL announced their Pro Bowl rosters yesterday afternoon. And if anybody needs proof these ain’t your daddy’s Pittsburgh Steelers, look no further. Granted being named to the team is a little like winning an Academy Award, reputation often trumps actual accomplishment and guys are often judged more on how much publicity their team receives than playing ability. Still, when several longtime mainstays fail to make the cut while a handful of new faces will be joining the NFL’s elite, it’s a sign the times, they are a-changin’.

The AFC’s defense was once pretty much a mash-up between the Steelers and Baltimore Ravens. The Ratbirds are still well-represented with four defensive starters. I know, I know, it’s an absolute joke that Ray Lewis made the team when he’s spent the year alternating between the injury report and doing his best impersonation of the Invisible Man. His days of knifing through the line of scrimmage like he’s at a night club in Atlanta have long passed. His making the team is a Lifetime Achievement award on par with giving Robert DeNiro a best actor Oscar for Meet The Fockers 6.

Meanwhile, the vaunted Steeler defense has only one representative, Troy Polamalu. James Harrison is a first alternate (meaning he goes if somebody is injured) which is also ridiculous since Silverback has been absolutely dominant when healthy. Methinks the Ginger Dictator pulled a little hanging chad action to make sure his mortal enemy didn’t get named a starter. If Stabby McStabberson makes it even though he’s missed a good chunk of time with injury, I don’t see how Deebo doesn’t merit the same consideration.

Regardless, Harrison is really the only defensive starter one might argue got robbed out of making the team. LaMarr Woodley and Ryan Clark were both listed as second alternates although I honestly don’t think either has done enough this season to merit a Pro Bowl appearance. About a month ago, I would’ve said Ike Taylor is a shoo-in but he’s had a couple rough games as of late and doesn’t make enough splash plays to get noticed. Brett Keisel is having a helluva season but suffers from what I’ll call Aaron Smith Syndrome where Dick LeBeau’s defensive scheme which doesn’t allow for d-lineman to pile up sacks ends up working against him. Multiple time Pro Bowler Casey Hampton has basically become a two down player so his absence is completely justified.

“Wait,” I can hear you saying, “I thought you said five Steelers made the team?” Ah, yes, and that goes back to my original statement about the changing face of the Black and Gold. Three years ago, if I said five Steelers made the Pro Bowl, most of Steeler Nation would figure that meant four defensive guys and a running back. Here in the waning days of 2011, it should come as no surprise to hear four of the Steelers’ five Pro Bowlers line up on offense.

Ben Roethlisberger and Maurkice Pouncey earned their second Pro Bowl appearances after getting screwed in previous seasons. Big Ben was snubbed in 2009 when he threw for 4,000 yards and 26 TDs yet was only named first alternate while Pouncer made the team last year but only as a back-up when he clearly should have been the starter. Joining them for the first time will be 2/3 of the Young Money crew, Mike Wallace and Antonio Brown. Wallace is currently the second leading receiver in the AFC and has shot to the head of many people’s lists of best big-play threat in football. AB, who set a Steelers team record for most all-purpose yardage on Sunday, was named as a kick returner although I get the impression his selection took into account all facets of his game.

No running back. No Hines Ward. Just our quarterback and a couple of his receivers. What are we, the Patriots? While I’m happy for all our players named to the team, especially the young guys, I hope none of them get to actually play in the game because they’re resting up for the Super Bowl. Given the kind of men that they are, I have no doubt they’re wishing for the exact same thing.