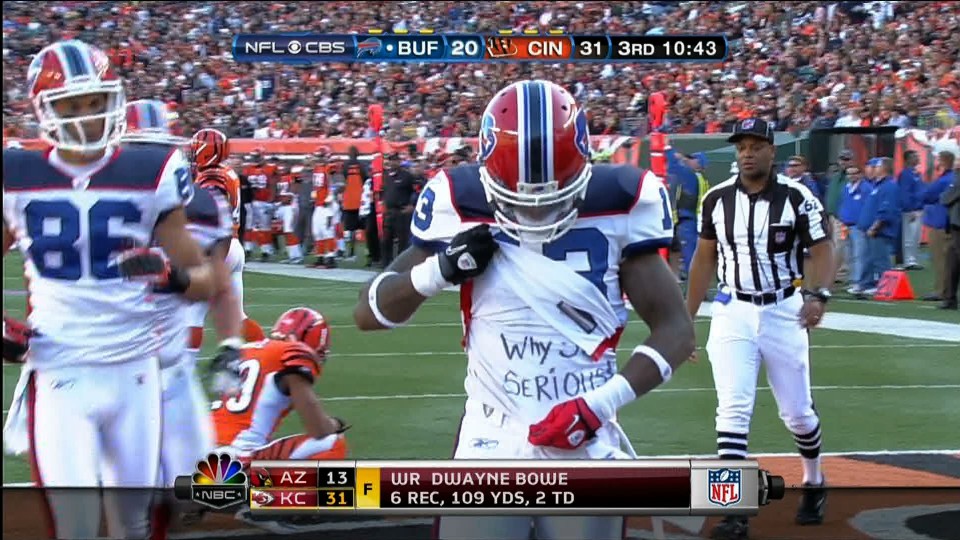 Sorry for opening with such a corny line but in this case it’s particularly apt. The Pittsburgh Steelers followed through on their vow not to use their Franchise tag on All Pro receiver Mike Wallace. Instead they tendered him an offer, making him a restricted free agent. What this means is one of three things will happen when the NFL’s free agency period kicks off at 4:00 ET next Tuesday.

Wallace may sign the one year offer for $2.75 million. Or another team may offer him a bigger contract, which the Steelers have an option to match. If they decide to match, the Steelers keep Wallace and the other team is S.O.L. If the Steelers decline to match, Wallace goes to that team with Pittsburgh receiving their first round draft pick as compensation.

Wallace isn’t going to sign that tender until free agency is over. He no doubt feels he’s worth more than what the Steelers have offered and he’s right. To give you a rough idea where the bar is for a young up-and-coming wide receiver, let’s look at the Buffalo Bills. They recently re-signed Stevie Johnson to a five year $36 million deal. NFL fans know Johnson as the dude who writes silly messages on his undershirt with a sharpie. Steeler Nation remembers him as the putz who dropped the game-winning touchdown pass in overtime, then blamed God for his butterfingers. In either case, you’d be hard-pressed to find someone who doesn’t view Wallace as the far better receiver.

While a $36 million deal sounds imposing, particularly to a team right up against the salary cap like the Steelers, it’s actually pretty doable. Only $11 million is guaranteed with the majority of the contract back-loaded to the final three years. His base salary the next two seasons is only around $2.5 million with the bulk of his guaranteed money comprised of an $8.5 million bonus which as we all know by now is spread equally over the length of a contract. Bottom line is his total cap hit next year will only be around $4 million which is a pretty good deal for the Bills if he were worth it.

Mike Wallace is worth it. I see no reason why the Steelers shouldn’t at least offer him a similar deal. They could always tack on an extra year in order to sweeten the pot with a bit more bonus money. While he’d be a tad underpaid this year and next, his final three years would see his base salary jump to the $7-8 million/year range where the likes of LarryFitz and Megatron currently sit. More importantly, the Steelers would have him set for the long-term thus freeing them to turn their attention to their other young receivers.

Lost in the Wallace discussion is the fact next year both Antonio Brown and Manny Sanders will also be restricted free agents. If by some miracle nobody goes after Wallace and he simply signs his tender, that would mean the Steelers are faced with re-signing their entire receiving corps next off-season. And that’s a situation I certainly don’t want to be in. Even though it may be the situation they want to be in.

My thinking goes like this. Antonio Brown certainly appears to be the best of the team’s receivers. However, he’s only done it one season and the Steelers would be foolish to throw a long term big money contract at him based on one season. They most likely want to see if he can duplicate his fantastic 2011 in 2012 before locking him up. If he does, then it’s a no-brainer, pay the man and let the chips fall where they may with the others. If AB proves to be a one-hit wonder, then you invest the bulk of your wideout money in Wallace while keeping the other two at a reduced price.

The wild card here is Manny Sanders. Lost in AB’s breakout season was the fact as rookies, it was Manny who looked every bit the future star. Last season was a lost year for Sanders as he battled knee problems which have plagued him since college. He did work himself back into shape by the end of the year and eventually showed flashes of his earlier excellence. If Sanders can build upon the promise he showed as a rookie, the Steelers may very well decide they’re set with him and AB and have no qualms about letting Wallace walk. Which is why it would be ideal for him to sign only a one year contract.

Unfortunately, I highly doubt the Steelers dream scenario will come to reality. Ask yourself, if Wallace were a regular free agent, how much would he command? I’d say between $4-6 million easy. Granted, that price tag would come without the loss of a first round draft pick, which is why a team desperate for a stud receiver like the Rams and Browns won’t go after him while he’s restricted. This basically leaves two teams to watch out for; the Patriots and the Bengals.

Both teams hold two first round picks and both pick at the ass-end of the draft. Just to clear up some confusion, the pick they’d surrender would be their regular pick, the one they acquired via trade, which in both cases  happen to be the earlier selection, would remain theirs. Of course, there are also extenuating circumstances as to why they won’t go after Wallace. For the Pats, they just franchised Wes Welker ($9.4 million) and faced with locking down their stud TEs to long-term deals while spackling together some holes on their leaky defense, they may be reluctant to commit big money to yet another receiver even though Wallace might catch 40 touchdowns next year playing with a QB who can throw a decent deep ball. And while it makes sense on paper for Cincy, who are well below the cap, to sacrifice a draft pick to bolster their offense while simultaneously sabotaging a division rival, these are still the Bungles we’re talking about. When have they ever made the smart move, especially when it would cost owner Mike Brown some of his precious pennies?

Whatever happens, the clock is ticking down toward the start of free agency. Let’s hope it’s also not ticking down on Mike Wallace’s career as a member of the Black and Gold. While I’ve certainly been critical of him this season, he remains an rare talent. And in an off-season already filled with roster upheaval, his departure may be one more than the team can endure.