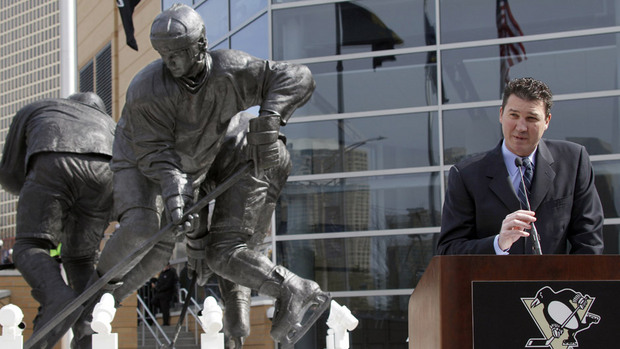 Two notable things happened on Wednesday. The big sports news of the day was the Indianapolis Colts releasing Peyton Manning. Locally, the Pittsburgh Penguins unveiled a statue of the greatest hockey player to ever lace up the skates, Mario Lemieux. Watching both events unfold, I couldn’t help but think of the recent purge by the Pittsburgh Steelers.

Breaking up is always hard to do. The Packers divorce from Bret Favre was full of drama and if some of Favre’s snide comments towards his successor are any indication, there are still hard feelings. Not to mention Favre ended his career playing the Vikings, who are to Packers fans what the Browns are to us. On the flip side, Manning’s press conference is already being hailed as the standard for athletic break-ups. While we should expect nothing less from football’s version of Mr. Perfect, I have to admit to getting a bit choked up listening to his heartfelt words.

And I ordinarily can’t stand the guy.

Manning’s situation is no different than that of Hines Ward. Both were synonymous with teams who achieved great success. Both are classy individuals who did a lot of good for the community. And while they may have seen their best days, both intend to continue playing football in 2012.

Where was Hines’ press conference? Why was the release of the greatest wide receiver in Steelers history made by a PR statement?  And where was Hines? His only response to being released was a short paragraph issued through his agent. Why didn’t he request a chance to personally express his feelings about moving on after fourteen glorious years in the Black and Gold?

When Chris Hoke retired a couple months back, the Steelers had a press conference where Hoke spoke touchingly about his time in Pittsburgh. With all due respect to Hokey, he’s hardly been a major part of the team’s success. Aaron Smith was amongst Hoke’s teammates who showed up to wish him well. Why didn’t Smith rate a similar send-off when he was recently released?

Now maybe the players were offered a chance to speak but declined. Smith has always been a blue collar player who shuns the spotlight. But Hines, well, Hines has never met a microphone he didn’t like. If he declined a proper farewell, it’s because that famous chip on shoulder has grown a bit larger to include the Steelers thinking he’s washed up.

There’s certainly some evidence that this divorce is more of the Favre variety as Hines recently posted a whiny little message on his Facebook page asking fans to express their anger over his release. Okay, it was supposedly posted by a member of “Hines’ team” and it was quickly taken down when people on FB and Twitter began mocking it unmercifully but I find it hard to believe anybody posts things in Hines’ name without at least checking with him first.

Then again, it’s equally plausible the Steelers never reached out to him or Smith. Steeler Nation considers their franchise the classiest in the NFL if not all of sports and that opinion is largely warranted. However, one area where they’ve consistently fallen short is how they deal with their ex-players. The Steelers have always put the Steelers first while the actual players who made them the greatest franchise in NFL history have been secondary. That’s why Mario Lemeiux gets a statue outside Consol Energy Center and the Pirates have more statues than World Championships yet the Steelers only choose to honor their founder, Art Rooney.

I have no problem with honoring our beloved Chief but the Steelers have the greatest dynasty in football history, they can’t come up with some way to acknowledge those players?  And they can’t put aside any tension or hard-feelings for twenty minutes to allow Hines one last farewell? I expect better from the Pittsburgh Steelers. We all should.