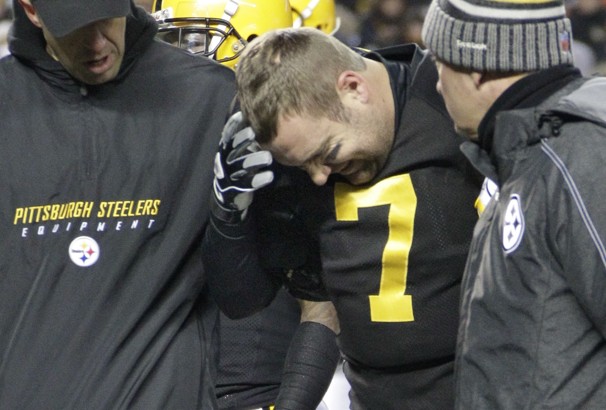 The official record shows the Pittsburgh Steelers 2011 season ended with a Wild Card playoff loss to the Denver Broncos. In reality, their season ended almost a month earlier, on December 8th. The Steelers defeated the Cleveland Browns on Thursday Night Football but the big story was quarterback Ben Roethlisberger having his ankle rolled up in cringe-worthy fashion. Big Ben was never really the same after that game and the Steelers’ offense goes as their star quarterback goes.

NFL head coaches are notoriously secretive when it comes to the health of their players. Bill Cowher once ripped a popular local sportscaster a new asshole for doing a story about a player’s injury, arguing that revealing such information makes that body part an inviting target for his opponents. Big Ben has never subscribed to this theory, however. If anything, Ben always seems more than eager to discuss what might be ailing him.

The subject of Ben Roethlisberger’s health is something of a running joke around Pittsburgh. At least two or three times a season, Ben will reveal to the media that he’s suffering some new horrific malady which he’ll heroically play through nonetheless. It’s gotten to the point the networks have a ready made graphic detailing how he’s experienced medical issues from the top of his head clear down to his toes. That’s not a figure of speech, Ben once claimed he played with broken toes, something Coach Cowher later scoffed at.

Don’t get me wrong, I’m not saying Ben lies about being injured, just that he has some odd fixation with exaggerating the severity of his bumps and bruises so as to enhance his reputation as the toughest QB in football. Between his penchant for holding on to the ball and the Black and Gold’s horrible offensive line play, Ben has definitely absorbed more than his share of punishment in recent years. That along with last year’s utter disaster in Cleveland was a strong incentive for the Steelers to finally address the long festering issues with the O-line. Address it they did by investing their first two draft picks on stud offensive lineman

The news making the rounds yesterday was Roethlisberger’s admission to Uncle Eddy Bouchette at the P-G that he’s playing with a “little torn rotator cuff.” Wait, what? Shouldn’t that of healed up over, oh say, the off-season? “That doesn’t heal.” said Ben. Okay, so it’s one of those injuries which needs surgical intervention. Why not get it fixed up over, oh say, the off-season? “It actually feels great. I don’t have any pains anymore.”

“We just have to hope it doesn’t tear the rest of the way,” added Ben. Ah, now I understand. Ben revealed this info to add more drama to Steelers games. Every time he’s hit, Steeler fans will hold their breath and cross their fingers that the rotator cuff doesn’t give way. Never mind that a partially torn rotator cuff is a fairly common ailment for professional athletes (one doctor said about 80% of athletes have some level of damage), Big Ben will heroically play on despite the constant threat that his shoulder might crumble and explode at any given second.