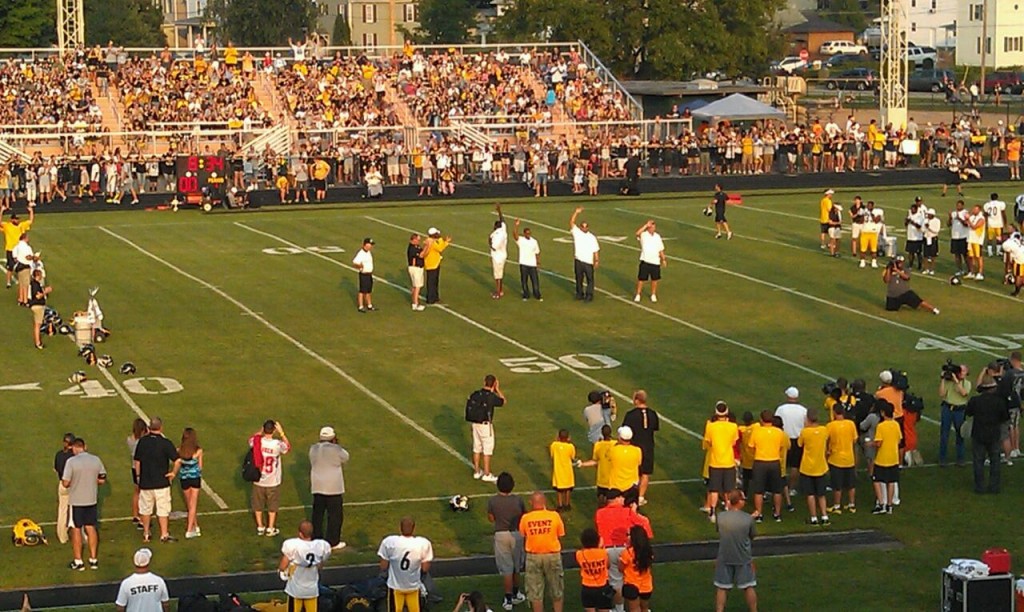 As the NFL kicks off the a brand new season, this past weekend was all about saying good-bye. Good-bye to former members of the Pittsburgh Steelers who, in the immortal words of coach Chuck Noll, are moving on to seek their life’s work. And also good-bye to two former Steelers and one Pittsburgh native who earned pro football’s highest honor, enshrinement in the Hall of Fame. In both cases, it was a busy weekend for Steeler Nation to bid old heroes a fond farewell.

On Friday, the Steelers held a “Friday Night Lights” evening practice as a sort of thank you to the horde of faithful who make the pilgrimage up to Latrobe for training camp. Fans were treated to a quarterback skills competition where Byron Leftwich evidently impressed with his ability to hit a garbage can at twenty yards and an impromptu heavyweight boxing match broke out between Mike Adams and Cam Hayward. There was also a pregame ceremony with four former Steelers officially retiring as members of the Black and Gold. The photo above shows (from left to right) Joey Porter, Willie Parker, Marvel Smith, and Aaron Smith bidding farewell to the fans.

Some cute chick who does video work for Steelers.com later conducted a short sit-down interview with all four which you can watch by clicking here.

On Saturday, Steeler Nation descended upon Canton, Ohio in what is probably going to be a yearly trip as many of the great Steelers of the Aughts become eligible for enshrinement in the Hall of Fame. I’ve been to the HOF a couple times and if you’re a football fan you really owe it to yourself to make the trip at least once in your lifetime. It’s a tremendous facility full of great exhibits, many of them paying tribute to either the Steelers or the rich history of football in Western Pennsylvania. If nothing else, the HOF busts room is a must-see because you literally can’t take three steps without running across a former Steeler.

Speaking of busts, did anybody else notice how amazingly lifelike the busts were this year? It used to be sorta hit or miss (Franco, for example, looked creepily like Shia LaBouf). Guess the NFL has finally started to employ some of that laser scanning technology they use to make action figures look exactly like movie actors. Whatever they’ve done, those likenesses looked amazingly spot-on.

Anyway, the first Steeler to the podium wasn’t a recent retiree but rather veteran’s selection Jack Butler. Butler, who I wrote about extensively on my old site after being contacted by his son, finally achieved the honor his family wanted so badly for him. A defensive back for some wretched Steelers teams from 1951-59, Butler nonetheless retired with the second most career interceptions (52) in an era when teams barely passed more than dozen times per game. His legacy endured, however, as he was named to the Steelers All-Time team, 50th Anniversary team and 75th Anniversary Legends squad.

Butler’s family definitely won the night by wearing those damnable Bumblebee throwbacks with Butler’s name and number on the back. Once again, I can’t embed the video so if you want to catch a snippet of his excellent speech, click here.

Then we had the man who continued the Steelers long tradition of excellence at center, Dermontti Dawson. Dirt, as he was fondly called by teammates and fans, was a seven time Pro Bowler and member of the NFL’s All-90s team. He, along with Rod Woodson, were the two players who bridged the twilight of the Noll era to the unparalleled success of the Cowher years. I caught Dermontti’s speech live and he gave a very touching tribute to the legendary Mike Webster (who was still here in 1988, moving Dirt to guard his rookie season) but NFL.com decided to cut that bit from the highlights for some unknown reason. You can watch what they kept  by clicking here.

Finally, the night’s most memorable speech came from Curtis Martin. Martin never played for the Steelers but he grew up in Pittsburgh and played his college ball at Pitt. Martin’s speech, particularly his asides about not liking to play football and especially not wanting to play hurt, finally explained some things for those who remember his injury plagued and, frankly, badly underachieving tenure with the Panthers. But Martin’s words went well beyond football, talking for the first time in pretty harrowing detail about how he grew up watching his mother being abused by his father and some of the incidents he escaped while running the streets with less-than-desirable friends. His story is truly one of rising from nothing to make good for you and your family and I’d encourage everybody to give it a listen by clicking here.