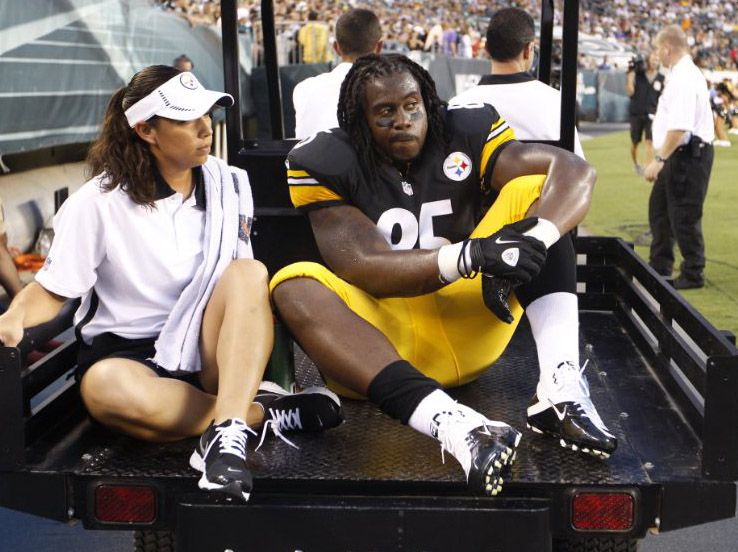 The Pittsburgh Steelers played their first pre-season game last Thursday. During the course of the evening, the worst thing that can possibly happen in an exhibition game happened: somebody was injured. Over the weekend, another player was carted off the field during practice. All this is in addition to the Steelers already having a veritable Pro Bowl team on the PUP list.

And the season hasn’t even started yet.

Here’s a rundown of the various injuries and where the Steelers stand at that position:

– In my recap of Thursday’s game, I mentioned Jon Dwyer ripped off two great runs before disappearing. Well, he didn’t disappear, he suffered a shoulder sprain which knocked him out of the game. The good news is x-rays were negative so all he needs is a little rest before getting back into the mix. Good thing, too, since Dwyer appears slotted as Redzone Redman’s primary back-up.

Elsewhere, John Clay was the guy carted off the field over the weekend. Later reports where that he has some sort of hip/groin injury which really tells us nothing. A hip pointer is painful but not season threatening. A groin tear is indescribably painful. I’d describe it for you but I’m not sure how many of you out there have groins. Point is, we don’t know where Clay stands although it appears he was headed back to the practice squad anyway.

– If you watched Thursday’s game hoping to catch a glimpse of Todd Haley‘s new look offense, well, you were probably more disappointed than the Canadian Olympic team. However, one big change was readily apparent. When the Steelers lined up to run, there was a player lined up in the backfield between the QB and RB. We never saw this during the era of Bruce Arians’ Flying Circus but I am assured it is legal to have a guy standing there.

In fact, the position even has a name: Fullback.

David Johnson was notified over the winter that his days as mediocre TE/FB hybrid were over and he would be moving permanently to FB. He lasted about a quarter against the Iggles before being carted off the field. Word came down over the weekend that it was indeed as bad as it looked. Johnson suffered the dreaded ACL/MCL double whammy and is lost for the season.

That leaves the Black and Gold with but a lone fullback on the roster. Will Johnson, who played his college ball for the hoople-heads of WVU, is now the de facto starter. The problem isn’t that Johnson has never started in the pros, he never even started in college. In fact, he was such a non-factor for the Mountaineers, he wasn’t even drafted when he graduated back in 2011.

Yes, you read that right. Not only wasn’t he drafted, he wasn’t even in football last year. What did he do? He probably planted trees, moved furniture or made Big Macs, you know, your typical post-graduation careers for WVU alums. While he evidently impressed Steelers scouts at his pro day (he talked his school into letting him come out), I’m not sure he’s ready for prime time.

– After Mike Adams horrid showing at LT, it was later revealed that he had sprained his MCL in the course of chasing after the speed rushers who ran right by him. Adams hasn’t been practicing this week and is expected to sit for a couple weeks while he recovers. This has caused some reshuffling of the O-line as the Steelers hope to hit on a combo that doesn’t get Big Ben killed before November. Let’s pray they succeed.

Marcus Gilbert, who didn’t look particularly hot at RT, has shifted over to LT in Adams’ absence. Raise your hand if you think he’s going to be there come the second week in October. The local media has such little faith in Gilbert, understandably so for those who witnessed the debacle in Indy last season, that they’re already writing up Max Starks as the savior at LT. Max is still on the PUP list but I have to think as soon as he gets cleared, he’s probably going to be the default starter at LT until he proves unable.

Meanwhile, Willie Colon didn’t play Thursday because he was hurt, SHOCKER, but it appears he’s finally gotten his fat ass out of the ice tub. He’s been starting at LG over the weekend as the Steelers seem hellbent on keeping David DeCastro on the right side for the time being. Given what I’ve seen of DeCastro, they probably should throw the rookie into the fire because I don’t trust Colon as far as I can throw him.

For those keeping score, the new new look line is (left to right) Gilbert, Colon, Pouncer, DeCastro, and Ramon Foster (who does this guy have incriminating photos of?). I guess they don’t want to confuse Colon by switching him back and forth because one would’ve assumed he would move to RT in a pinch over the horrid Foster. I’m not going to lie, that entire line-up looks absolutely frightening. Get well soon, Max!

– Finally, I neglected to mention the non-football players in my recap because I don’t care about them. Plus, you know it’s a meaningless game when Shaun Suisham booms a 46 yard FG. No way Miss’em Suisham does that in an actual NFL contest. He only excels when the pressure is off.

Besides, the Steelers aren’t going to enter the season with a rookie kicker. Just ain’t gonna do it. Danny Hrapmann can boot a 75 yarder and he’d still be cut in two weeks. So while it was nice to see the kid knock through a 43 yarder with plenty to spare, he’s not beating out Miss’em.

On the flip side, rookie Drew Butler might have a shot. Thanks to an injury to incumbent Jeremy Kapinos, Butler got the spotlight to all to himself on Thursday and may have Lou Gehrig’d himself into a job. Butler averaged an impressive 50 yards per punt with one traveling a whopping 61 yards. Kapinos averaged around 45 yards last season but his career average is around 40 yards, which explains why he’s been cut so many times. Since Kapinos isn’t a Colbert draft pick, I don’t think the Steelers really care if they keep him or Butler. If the kid continues launching moon shots, he’ll win himself a spot on the roster.