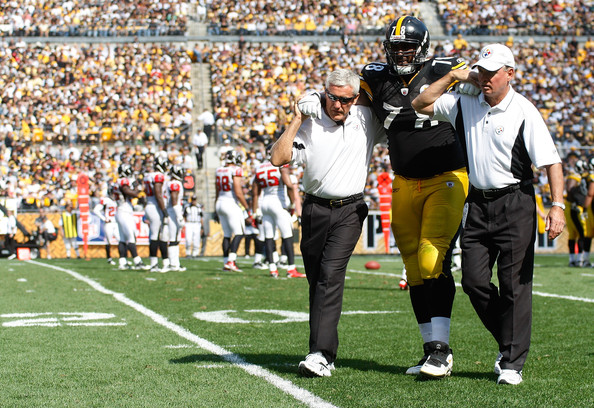 The Pittsburgh Steelers began training camp with a veritable Pro Bowl team on the Physically Unable to Perform (PUP) list. On the positive side of the ledger, LT Max Starks has been cleared to officially rejoin the active roster. Not a moment too soon, either, as rookie Mike Adams sprained is MCL in the pre-season opener and will be sidelined for the next couple weeks. Marcus Gilbert can now return to RT, where he’s far less likely to get Ben Roethlisberger killed, while Mad Max once again rides to the Steelers’ rescue on the left side.

As Max returns, it appears James Harrison‘s stay on the PUP list will be longer than initially thought. Harrison hasn’t practiced since the team arrived in Latrobe and now word from his agent is he may need to get his knee scoped before the season begins. That’s not a major operation, players get scoped during the season all the time and usually only miss 3-4 weeks. What is troubling is that Silverback’s game is predicated largely on speed so who knows how effective he’ll be playing on a bad wheel.

In lesser news, the Steelers shuffled their roster after losing both RB John Clay and FB David Johnson to season-ending leg injuries. Both players were cut (that’s cold) yesterday although DJ is expected to be re-signed and placed on IR so the Steelers can supervise his rehab. The Steelers signed RB Jason Ford, who was waived by the Texans a couple weeks back, to carry the ball during the second half of Sunday’s pre-season game against the Colts before being cut in two weeks.

Meanwhile, with only one FB left on the roster (undrafted rookie Will Johnson), the Steelers signed journeyman Justin Peelle to provide some depth. Peelle has played for five different teams during his ten year NFL career, mostly as a tight end but also playing some fullback. He spent 2011 with the 49ers where he served as a FB/TE hybrid similar to how Bruce Arians’ used DJ. Peelle is supposedly a pretty good receiver out of the backfield but the Steelers have a two great receiving TEs and a great third down receiving back (Chris Rainey) so I would guess whoever does a better job lead blocking will win the job.