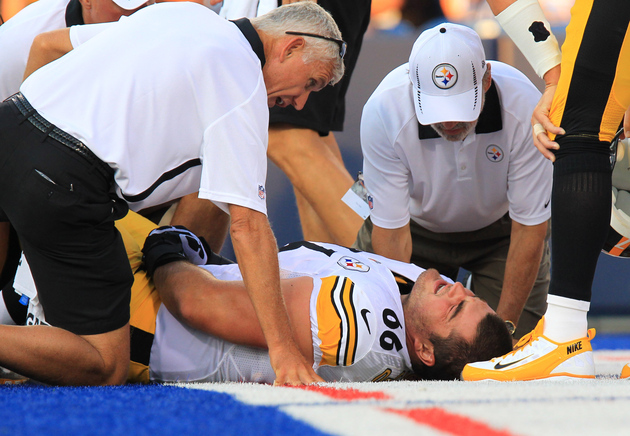 I hate the preseason. I’m sure I’ve made that abundantly clear since I mention it in every one of these damn recaps. But it bears repeating because literally nothing good comes from preseason games. Honestly, outside of a Super Bowl or a AFC Championship game, the only time I’m truly a nervous wreck watching Pittsburgh Steelers football is during the preseason. Injuries can happen at any time but they’re a hundred times more galling when they occur before the season actually starts.

Luckily, coaches have figured out what a deathtrap exhibition games are so they play their starters sparingly. Unless you’ve brought in an entirely new coaching staff or starting a rookie quarterback, starters usually only play a handful of series in the first two games. It’s the third game that’s the tricky one as that’s where coaches usually give the starters an entire half to work off the rust picked up during the off-season. If something bad is gonna happen, it usually happens in that third preseason game.

Guess what? Something bad happened.

Shortly into Saturday night’s game against the Buffalo Bills, Marcus Gilbert, who spends more time on the turf than a groundskeeper, got thrown to the ground as usual. In falling, he took out round draft pick David DeCastro, who was actually blocking his man. The cameras soon spotted DD on the turf clutching his leg in agony. A few minutes later he was loaded into the Cart of Shame and left to assess the damage. After the game, Mike Tomlin would only offer that his injury “was severe.” While the Steelers still haven’t released any specifics, word from ESPN’s Adam Schefter (toldya the national guys are way more wired in than the local media) is that DeCastro tore his MCL, dislocated his knee cap, and damaged his patella tendon.

It appears DeCastro avoided the dreaded Double Whammy of an ACL/MCL tear. Which is sort of like being happy you got herpes but didn’t knock up your girlfriend when your condom broke. Although make no mistake, avoiding the Double Whammy is indeed a big positive. Despite conflicting reports from NFL.com and no official MRI report from the Steelers, reporters seem fiarly sure DeCastro’s ACL is okay.

For whatever reason (I’m not a doctor), an ACL tear is the worst injury imaginable. An MCL injury, while also serious, seems to be less dire. In any case, DeCastro will likely need surgery and I’m fairly certain he’s not going to be back this season. Lineman sometimes gut through knee injuries so depending on the severity of the damage, I suppose it could be possible for him to return late in the year but I have no idea why the Steelers would want to rush him back. We’ll see when the team releases an official medical report but until we hear different, I’d just assume he’s lost.

As DeCastro departs, the Steelers welcomed back Max Starks on Saturday. Mad Max looked good at LT. He had a few hiccups early but once he found his groove he looked just like the Max of old. Pretty sad that this team invests pick after pick on OTs yet keep turning to that old warhorse to bail them out every season. The new new look O-line will be (left to right) Starks, Colon, Pouncey, Ramon Foster and Marcus Gilbert.

DeCastro wasn’t the only casualty on Saturday. DE Brett Keisel was also helped off the field in some pain. Thankfully, it appears he only suffered an ankle sprain and should be okay by the opener. Of course, we know the Steelers love to lie about these things so who knows. If he has the dreaded high ankle sprain, that’s the kind of injury which lingers all year.

The good news was second year man Cam Heyward played in Keisel’s stead and did well. Remember Ziggy Hood languished on the bench for a couple years before the light bulb came on so perhaps Cam is a quick learner. The Steelers D looked terrific against Buffalo, generating a ton of pressure on Buffalo QBs which lead to several turnovers. I’m still not sure about the secondary but if the line and linebackers can dominate scrimmage like they did on Saturday, that’ll really cover for a lot of shortcomings.

Offensively, we got our first prolonged look at the Haley offense. Things started a little rough as the wide outs had a ton of drops which repeatedly stymied their drives. Manny Sanders, in particular, got open for a long gain but Sweed’d a perfect pass from Ben. The best action came late in the half with the Steelers backed up to their 1. Ben got them out of trouble by throwing a 30 yard bomb to Jonathan Dwyer…yes, Jon Dwyer. Isaac Redman finished up their previous drive with a tough 2 yard TD run so between iRed and Dwyer, the Steelers look to have a pretty impressive running back tandem. Early in the second half, Lefty came in after a pick by Troy and tossed another 40 yard bomb to AB.

Who says they have no deep game without Mike Wallace?