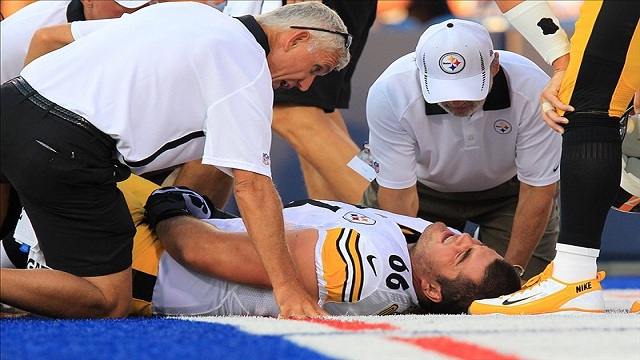 He may look like Private Pyle but he plays like the Terminator. And just like the T-1000, David DeCastro will be back. The only question is when. While the Pittsburgh Steelers continue to guard injury information like it’s nuclear launch codes, reports are that DeCastro’s knee injury may not be as bad as initially feared.

Don’t get me wrong, it’s bad. He’s undergoing surgery today and faces significant rehabilitation time. However, word is the team is not putting him on the Injured Reserve list, meaning they must think there’s an outside chance he’ll be ready to return before the end of the 2012 season. Once you’re placed on IR, your year is officially done. That’s why Rashard Mendenhall and Casey Hampton, two players coming off major off-season surgery who aren’t expected to be ready for the first portion of the season, aren’t on IR either.

Fans of the Steelers know this as a Woodson Situation. Rod Woodson tore his ACL in the opening game of the season back in 1995 but the team kept him on the active roster hoping he’d make it back. Rod would eventually become the first (and to my knowledge, only) player to return the same season in which he suffers a torn ACL when the Steelers dressed him for the Super Bowl. He had a pretty good game, too.

The Steelers tried to recreate the Woodson Situation a couple years ago when Aaron Smith tore his triceps tendon but vowed to return. Despite again making it all the way to the Super Bowl, Smith never recovered well enough for the coaches to put him back in. Although much of that was likely due to his replacement, Ziggy Hood, playing very well in his stead.

Obviously the drawback to keeping DeCastro off the IR is that the Steelers will basically be playing with one less sub on the bench. That wouldn’t be a huge deal since the 53rd man usually seldom sees the field anyway but the Steelers will actually be playing with three less players. As mentioned, Mendy and Big Snack are in various stages of recovery meaning that’s two more guys they’ll have to carry on the active roster who can’t play.

With DeCastro out, Ramon Foster returns to the starting job at RG. With Foster back, the line basically returns to what we had at the end of last season, the only change being Willie Colon at LG in place of the Big Legursky. Left to right, are starters will be Max Starks, Willie Colon, Maurkice Pouncey, Ramon Foster, and Marcus Gilbert. I’m not sure how I feel about this combo although Starks at LT rather than the inept Gilbert is comforting and anybody in place of Kemo at LG is an improvement.

Speaking of the 53 man roster, with the third preseason game in the books, teams had to cut their rosters down to 75 men as of Monday. No real notable names except LB Mortty Ivy, a Monroeville kid who made the team last season but was hurt this year and S Myron Rolle, the Rhodes Scholar from FSU who skipped a year to study abroad. Kicker Daniel Hrappmann was also among those let go as I try to resist the urge to yell I TOLDYA SO, I TOLDYA SO.

I hate preseason games but going on Twitter during them to watch people tweet that some third string linebacker is going to replace James Harrison because he got a sack in the fourth quarter against the a bunch of undrafted free agent OLmen does make them more tolerable. I enjoy laughing at dummies. Look, the guys who play in the second half are marginal NFLers and/or training camp fodder, nothing more. Hrappmann was never going to unseat Shaun Suisham, even though if anybody should have to earn their job it’s ‘ol Miss’em.