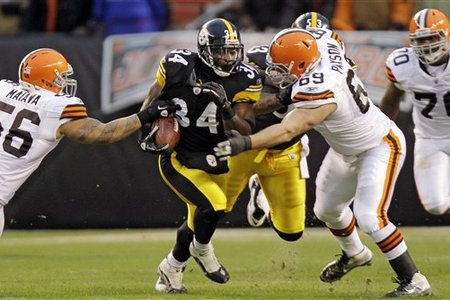 What a difference six months can make.

Back in March, Pittsburgh Steelers GM Kevin Colbert was making the media rounds addressing the state of his team. One subject he was repeatedly quizzed on was the status of injured running back Rashard Mendenhall. Mendy suffered a torn ACL in the Steelers’ final regular season game against the Cleveland Browns last December, an injury which usually entails 8-10 months of recovery time. Colbert said that he expected Rashard back in 2012 but probably not until mid-season and even then in a limited role since players usually need at least a full year to get fully back up to speed after such a catastrophic injury.

Even as recently as a couple months ago, Uncle Eddy behind the P-G’s obnoxious pay wall was dropping hints that Mendenhall was coming along slower than the team anticipated and may not be back at all this year. Most everybody figured he’d remain on the PUP list for the first month or so of the season at the very least.

Well, I don’t know if Mr. Miyagi rubbed his hands together and brought some magical healing to Mendy’s knee or what but reports surfaced yesterday that Mendenhall is not only practicing with the team at full speed sans his knee brace, he looks like he may be good to go on Sunday. He didn’t take a single snap during preseason and, as far as I know, spent all of camp on the PUP list standing on the sidelines. Then again, so did James Harrison and, for the most part, Casey Hampton and both of them are expected to start on Sunday. Big Snack is also coming back from a major knee injury although being fat and clogging up the middle doesn’t quite require the same speed and maneuverability being a running back requires.

If Mendy has recovered well enough to start against the Broncos, that would certainly speak well of determination and recuperative powers. Although it’s hardly unusual as Adrian Peterson also tore his ACL late last season and he’s off the PUP list and pushing hard to start on Sunday. Surgery has gotten a lot more advanced as time has gone on. Plus now we have the wondrous rehabbing machine known as the Wii.

I’ll admit I’m a little confused over news of Mendenhall’s progress. For one, Mike Tomlin is notoriously secretive about injuries so all this info “leaking” out is a bit surprising. I suppose he could be saying this to give the Broncos something else to prepare for. If that is the case, Mendy instantly becomes the most laughable decoy ever. No team tailors their game plan to stop Rashard Mendenhall. No team practices in mortal fear that the unstoppable juggernaut known as Rashard Mendenhall will single-handedly cost them the game.

If football players were judged in Moneyball terms, Mendy would the be definition of replacement level.

Then we have the question of effectiveness. Mendenhall was awful last season before suffering a major injury. Surgery may have advanced but ACL repair isn’t like Tommy John surgery where a player often comes back better than before. In fact, running backs are a lot like cars. You can take them to the shop for repairs but they never run the same as when they were shiny and new.

If you’re a fantasy footballer, you’ve probably seen 349 articles warning you to stay away from AD because you never know how he’ll play coming off ACL surgery. Same thing goes for Mendy. And Peterson is at least someone who can play a physical game if he doesn’t have his speed, Mendy was never a lower-your-shoulder power type back. The only thing separating him from the Redzone Redmans and Jon Dwyers of the world was his cut back ability and big play speed. Take that away from him and I don’t really know what he brings to the table.

Remember Willie Parker when he wasn’t so fast anymore?