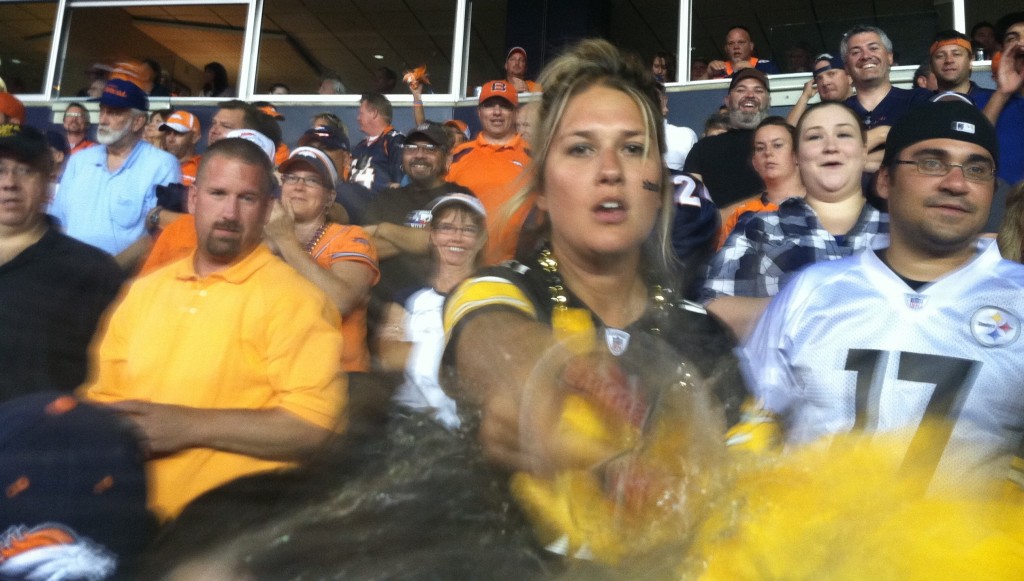 Pittsburgh native Andy Warhol once predicted that in the future everybody will have their own 15 minutes of fame. Like the cute Pittsburgh Steelers fan pictured above who is getting a lot of press on Steelers blogs after Deadspin ran a story about her drunken antics in Denver. Ordinarily I ignore these things because 90% of Steeler Nation are good peeps, it’s the other 10% which gets posted on blogs or mocked in crappy Kevin Smith movies. However, I figured I’d mention it because it’s a story going around and she is strangely attractive.

Plus, she’s wearing beads and we all know how girls get those beads…

Why doesn’t anybody give some press to the more positive aspects of Steeler Nation? Well, funny you should ask. If you’re a fan of the Pittsburgh Steelers and you haven’t gotten your fifteen minutes of fame yet, you just may be in luck.

HBO Sports produces absolutely fantastic programs. Football fans are probably aware of the Hard Knocks reality series. Even though they tend to follow teams that either stink (Chiefs, Dolphins) or are total circuses (Cowboys, Jets), the show never fails to entertain. In the highly secretive world of NFL football, it’s a rare peek behind the curtain.

HBO Sports does a lot more than Hard Knocks, though. They don’t produce as many documentaries as ESPN does with their 30 For 30 series but the handful a year they do are always tremendous. A couple years back they did a fascinating doc on the legendary Vince Lombardi and just last season there was a fantastic program on Beaver Falls’ own Joe Namath. If you were too young and missed football from the AFL/NFL merger through the early 70s, the doc really showed why Namath is a legendary figure to kids who grew up during that time.

HBO Sports newest endeavor is a documentary on NFL Fans. They’re looking for diehard fans from around the nation telling stories of memorable moments, encounters, and experiences as a fan of their team or athlete. Naturally they’re very interested in hearing from the most rabid fan base in the NFL. So if you’re a fan of the Pittsburgh Steelers and have a story you think they’d be interested in, you’re encouraged to get in touch with the people casting the documentary.

How might you do this? All your questions will be answered by clicking this link. The flier offers a brief description of what they’re looking for as well as a contact email for you to get in touch with the casting director. So if you’re a diehard member of Steeler Nation with a story to tell (and who among us doesn’t have a story to tell?), get in touch with them ASAP. Get your fifteen minutes and show off your Black and Gold pride while you’re at it. Good luck!