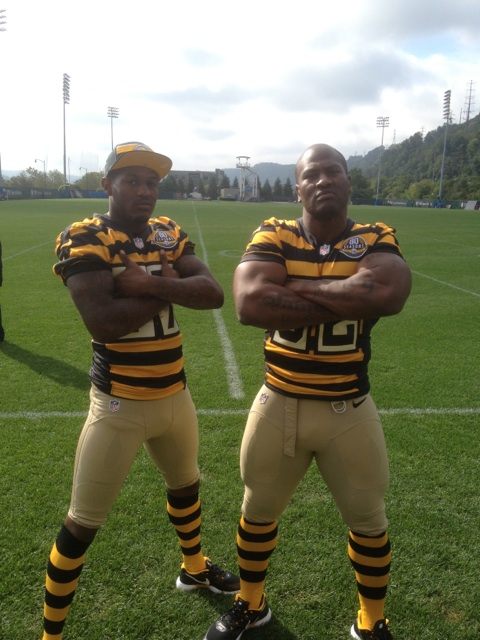 As of this writing, neither James Harrison nor Troy Polamalu have practiced this week. Mike Tomlin, in his weekly lie-fest, er, press conference, was non-committal on their ability to play this Sunday when the Pittsburgh Steelers travel out to Oakland. I’ll talk about Troy more at a later date. Today I want to address the rumor around town that Harrison is out at least through the bye week with his return expected week 5 against the Eagles.

Yeah, I’ll believe it when I see it.

There is something really strange going on with our former Defensive Player of the Year. The Steelers are never going to give you a straight answer because deceit and deception are the order under Tomlin’s corrupt regime. But going by what we do know, something smells fishy and it’s not Wholey’s Market. What the hell is wrong with James Harrison?

He played very well last season missing time only after suffering a broken orbital. He was by far the team’s most effective linebacker. He showed up to OTAs following off-season back surgery and even participated in some practices (We think. They’re closed to the reporters/public). Then training camp started. Harrison never got on the field, spending the entire month on the sidelines complaining of a sore knee. When asked about the injury, he downplayed it, saying it just felt stiff or sore or whatever but nothing major. Then with two weeks before the season started, he got it scoped. Again, we were told nothing major, he should be back before the season opener or the week after at the latest.

Now we’ve pushed the timetable back to week 5.

Harrison’s knee is either FUBAR’d way more seriously than we’re being told or he’s having other issues. In any case, it seems the guy is breaking down physically at an alarming rate. As I said, he played at a very high level last season but he is 34 years old. Combined with the fact he’s always been a bit undersized as a linebacker and perhaps this is the beginning of the end.

Where does this leave the Steelers? One thing I do know is he’s due to make $9 million next season. Ordinarily I’d say no way they pay that much for a broken down linebacker but they kept Aaron Smith on the roster way past the point of sanity. From Greg Lloyd to Joey Porter, the Steelers have traditionally been ruthless about cutting highly paid linebackers the second they begin to lose a step. But it seems like Tomlin and GM Kevin Colbert have abandoned that philosophy in favor of trying to squeeze every last drop of blood from the stone.

Perhaps part of their reluctance to part with established vets is we don’t have any viable replacements. The Steelers had trouble pressuring the QB last season when Harrison and LaMarr Woodley were only together for a few games all season. That’s because they only have two good pass rushers and there is a pretty steep drop-off when you go to their back-ups. It’s easy to say “cut Harrison” but do the Steelers really think they can play top level defense with Chris Carter or Jason Worilds starting opposite the Woodman?

If the Steelers cut Harrison, they could use that money for important things like signing Mike Wallace to a long-term contract. If the Steelers D needs rebuilding, keeping their offense strong would seem to be the only viable way to remain competitive in the meantime. It’s not the Steeler Way. But it may be the only way.