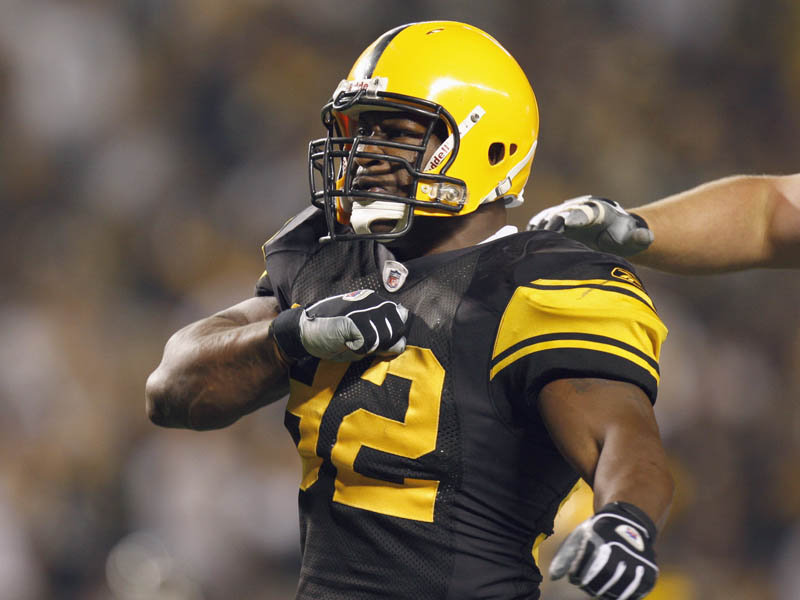 The Pittsburgh Steelers play host to the Philadelphia Eagles this weekend. The Black and Gold’s anemic running game may get a boost when Rashard Mendenhall takes the field for the first time this season. Mendy tore his ACL in last season’s finale against the Browns and will be making his return to the starting line-up almost exactly ten months later. That’s not the greatest recovery of all-time but it’s still damn impressive.

Meanwhile, James Harrison ended 2011 alongside his teammates in Denver, yet hasn’t taken a single snap in 2012. And at the rate he’s going, I’m starting to wonder if he ever will.

Harrison participated in his first practice of the year last Tuesday. On Friday, the team held another practice. Harrison never made it. His knee experienced “a little bit of a setback” which evidently was so little that the team is now all but ruling him out of Sunday’s game against Philly.

What in the blue hell is going on with Deebo?

Mike Tomlin is an unapologetic liar so we can’t expect answers from him. Instead, we’re going to have to solve this mystery ourselves.  Let’s review what we know.

– Harrison played very well in 2011, easily the team’s most effective pass-rusher. The only games he missed were due to a broken orbital socket and an unjust one-game suspension.

– Over the off-season, Harrison had two back surgeries. The first was to take care of a problem which he played through during the season. The second was evidently to clean up something the first surgery missed.

– Harrison showed up for all the team’s off-season OTAs and, from all accounts, participated normally. Of course, OTAs often entail nothing more strenuous than guys in shorts running through plays at 1/4 speed.

– Training camp starts. Harrison was put on the Physically Unable to Perform (PUP) list on day one and never came off. When asked what was up, we were told a never previously mentioned knee problem (?) was acting up (?). However, we were assured the PUP list was precautionary and, with rest, he’d be good to go by the season opener.

– With two weeks before the season opener, Harrison has “minor knee surgery,” what we’re informed was routine scoping, because the knee wasn’t responding to treatment. We’re told by all involved (Tomlin, Harrison, Harrison’s agent) that he still thinks he’s on track to play in the opener but, failing that, he’ll definitely be ready by week two.

– Week one, no Harrison, Week two? Knee is still acting up so we’ll wait and see what happens next week. Week three comes around and everybody is all, “We have the bye after this game so let’s give James this week off so he gets two solid weeks of rest and then is ready for Philly in week 5.” Well, here we are at week 5 and now it’s “wait ’til next week.”

Pirates fans are used to being told wait for something that never comes. Steeler fans, not so much.

Rumor around town is Harrison has received synvasic injections to try and get him back on the field. Synvasic, as those who have a loved one suffering from severe arthritis know, is something they shoot into arthritic knees when the joint has deteriorated to the point it’s basically bone on bone. If this story is true, Harrison’s knee is, pardon my french, pretty well f**ked.

Then again, there are holes in this theory. For one, we also know arthritis is a progressive disease which breaks people down little by little year by year. As mentioned, Harrison played tremendous last year. It doesn’t make sense that he’d go from All-Pro to 80 year old cripple over the course of ten months. If he’s battling an arthritic knee, we would’ve seen a more gradual decline.

Another rumor is the “routine scope” procedure he had in pre-season was not a routine scope. This one I’m much more on board with. At this point, I’m definitely calling shenanigans on everything we’ve been told since the start of camp. I think it’s pretty obvious that the “routine scope” procedure he had in pre-season was much more than a routine scope. I’m not a doctor so I can’t tell you what sort of surgeries he might have undergone but I do know what arthroscopic surgery is. My beer swilling 250 pound uncle who hasn’t lifted a weight since he was a third string LB behind a fella named Bill Cowher at Carlynton High School had his knee scoped and was walking around normally in three weeks. Surely an elite athlete like Deebo would be fully recovered nearly two months later.

The bottom line is this: James Harrison isn’t playing this Sunday. And I highly doubt he’s playing next Sunday either. In fact, with Harrison due to make $9 million next season, I’m not entirely certain we’ll ever see #92 in the Black and Gold again. I hope I’m wrong because given the inability of LaMarr Woodley to regularly overcome double teams and the sad lack of pressure provided by Chris Carter and Jason Worilds, the D surely needs him. However, at this point I think we all need to take a step back, stop listening to the B.S. emanating from Steelers HQ, and just assume he’s not playing until we actually see him on the field. In the meantime, the linebacking corps will have to make due without him.