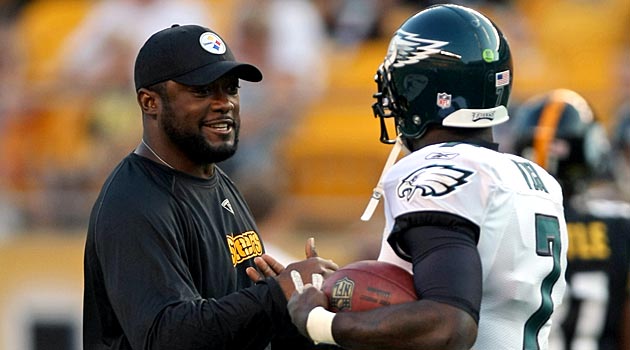 The Battle of Pennyslvania. It occurs every season but only once every four years does the game actually count. This Sunday, the Philadelphia Eagles make the trip west to Heinz Field to face off against the Pittsburgh Steelers in a game that could be a tipping point for both teams.

I’m loathe to proclaim week five a “must win” scenario (especially when it’s only the Steelers’ fourth game) but I truly think this weekend will set the table for the rest of 2012. The Eagles are 3-1 but they’re pretty much the worst 3-1 team you’ll ever find. Appropriate for the city they represent, Philly has epitomized the term “winning ugly.” They could as easily be 0-4 as their three wins have come by four total points.

Meanwhile, I have no idea what to make of the Steelers. They whupped the Jets but that looks a lot less impressive in hindsight because the Jets absolutely suck. Meanwhile, they lost close games to the Broncos and Raiders where their defense played like garbage and their offense performed well until crunch time. Now that we’ve seen other teams in action, I can pretty confidently say we have yet to play a really top level team. Regardless of where you slot the Eagles, our schedule definitely gets a lot harder from here on out.

Ah, Michael Vick. A story making the rounds the past couple days recounts how Mike Tomlin wanted to bring Vick to the Steelers after he finished serving time in the clink on his dog fighting charge. Of course Tomlin wanted him. They’re both Virginia guys and Tomlin won’t rest until he has an entire roster of black quarterbacks. Never mind the fact Vick is a dog-raping scumbag.

He also continues to be a vastly overrated quarterback. Vick reclaimed his position as starter several years back but in many ways he’s still the same guy he was with Atlanta. Which is to say, just a more hyped version of Kordell Stewart. Tremendous athlete, can make plays with his feet as well as his arm but suffers from questionable decision-making and not a dependable pocket-passing QB. Teams have been forcing him to remain in the pocket and when he does  he’s a veritable turnover machine. In only 4 games, he’s thrown 6 picks and fumbled 5 times.

That’s the good news. The bad news is the Eagles have the kind of big play offense that can make up for his mistakes and make up for them fast. Desean Jackson is a home run threat on every play. Former Pitt Panther Shady McCoy is a Ray Rice-like weapon at RB who can break a long run at any time. Much like Darren Mcfadden did in our last game, either one of those guys can be stopped nine times out of ten but that tenth play ends up being a 50+ yard TD.

Which makes this a really bad match-up for the Steelers. Going back to last season, the Steelers D has exhibited the bad habit of giving up big plays at bad times through both the ground and air. Likewise, Vick is a turnover candidate for a D that hasn’t been able to force many turnovers. So something has to give. Let’s hope it’s not the D.

Getting Troy Polamalu and James Harrison back will definitely help. Dick LeBeau‘s defense is carefully constructed where the success of A often depends on B doing their job. With key pieces missing, things tend to fall apart. Troy is a disruptive influence who often forces turnovers just by the opposing QB never knowing where he’ll line up. Having Harrison and LaMarr Woodley on the field together for once should generate the kind of pressure that forces QBs into making mistakes. Both Troy and Deebo have practiced all week and barring a last minute setback (which is not out of the question), we should see the Steelers defense, the REAL Steelers D, back on the field for the first time in a long long time.

Todd Haley‘s eight minute drives are great and all but when the other team can get the kickoff and answer with a TD of their own in three plays, it all goes for naught. I’m not sure Ben Roethlisberger can play any better than he has thus far. Some members of Steeler Nation are blaming him for not leading comebacks and, true, if your rep was made as a clutch money QB, you need to start pulling some games out. At the same time, Big Ben’s putting up some truly incredible numbers. Nearly 70% completion rate, 900 yards not even 1/4 through the season and 8 TDs against only 1 (extremely costly) interception.

The Steelers strength is their receivers. We all know this. Antonio Brown and Mike Wallace picked up right where they left off. Jerricho Cotchery and Manny Sanders don’t catch a ton of balls but make their chances count. Then we have Heath Miller. We’ve always known he’s perhaps the most well-rounded TE in the league and Boss Todd’s offense is finally showing the rest of the NFL what he can do.

As fantastic as the receivers are, you can’t throw all the time. You just can’t, especially if you want Ben to survive to week 10 without catastrophic injury. The running back by committee has been an abject failure with nobody accomplishing much of anything. Rashard Mendenhall will see his first action since tearing his ACL in the season finale against Cleveland. He’ll likely still split carries with iRed (on short yardage) and Rainey (on passing downs) although I figure his workload will depend on how things go. Adrian Peterson suffered a similar injury last year and has done fine as his team’s featured back so I don’t foresee Mendy being limited by anything other than game situation and his own performance.

The Eagles don’t play great defense but it’s an opportunistic group. Dominique Rodgers-Cromartie already has three picks. Speedy defensive ends (the bane of the Steelers existence) Jason Babin and Trent Cole have combined for four sacks. Through the first four games, they’ve epitomized bend but don’t break. If the Steelers offense becomes too one-dimensional, that’ll play right into their hands. I’m not saying rely on the running game but it’s time they pulled their weight.