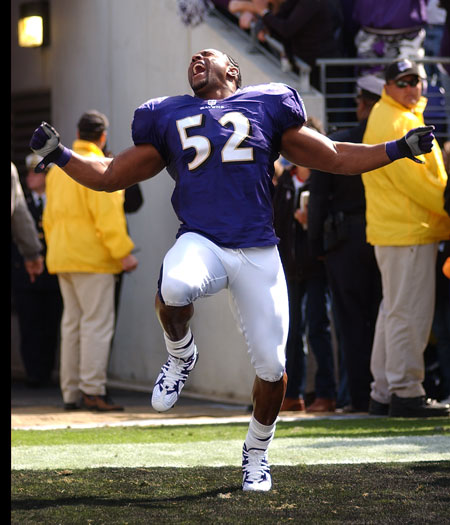 They say it isn’t nice to rejoice in the misery of others.

When it comes to the Baltimore Ravens, I’ll make an exception.

If you avoided last night’s Monday Night Football game, well, you missed an epic collapse by someone other than the Pittsburgh Steelers. You also missed ESPN’s talking heads waxing poetic about the life and career of Ray Lewis. It was absolutely nauseating.

At one point, Trent Dilfer actually held Ray-Ray up as a role model “for the children.” Well, I guess if you want your child to respond to taunts like, “Your dad was the worst quarterback to ever win a Super Bowl!” by stabbing their school mate to death, sure, he’s a great role model. Where’s Lady Gaga when you need her? I thought we were taking a stand against bullying?

Lewis left the game last Sunday with what was later diagnosed as a torn triceps. That injury will effectively end his 2012 season. Peter King later opined that he believed Lewis will retire rather than attempt a comeback. The 37 year old Lewis has said in interviews that he would like to watch his son play for his alma mater (the University of Miami, where else?) come next year, sorta hinting this was his last rodeo. Of course proud athletes usually don’t like to go out via injury, not to mention if Peter King predicts sunshine, you best pack your umbrella, so it’s far from certain we’ve seen the last of Lewis and his obnoxious dancing.

If he does retire, we still probably haven’t seen the last of him. Both Dilfer and Steve Young all but laid out a Welcome mat on the set. Lewis is certainly the type networks lust after. A loudmouth no-nothing whose career was built on trash talk and cheap shots. That’s why idiots like Rodney Harrison and Shannon “Mushmouth” Sharpe are hot commodities while thoughtful ex-players like Jerome Bettis are quickly cast aside.

I was listening to talk radio when the news broke and I must say, I was disturbed by what I heard from some of the callers. Granted I listen to the Mark Madden show and the people who call in either get shouted down for disagreeing with him or kiss his ass. But there were several listeners who actually said they’d miss Stabby McStabberson. One moron even said if he had to pick one player he wished could’ve been a Steeler, he would’ve picked Ray Lewis.

It’s incredible to me that a large segment of Steeler Nation still hasn’t forgiven Ben Roethlisberger for whatever did or didn’t happen in Georgia, yet they’ll talk nicely about Ray freakin’ Lewis. Ray Lewis, who, unlike Ben, was actually convicted of a crime.  Ray Lewis, the guy who, if he didn’t stab someone to death, stood by and watched as a friend did. Yet Big Ben finishes near the top of the Most Hated NFL players list every year while ESPN lauds Lewis as a role model for children.

Sometimes I hope the Mayans were right.

In any event, Ray Lewis is out for the season. If he retires, all the better. In the meantime, Lewis was only about a tenth of what he used to be (although you wouldn’t know it from the announcers acting like he was still in his prime) so don’t think this is some great blow to the Ratbirds. Truth be told, the loss of their top corner Ladarius Webb is going to hurt them a lot more in the long run.