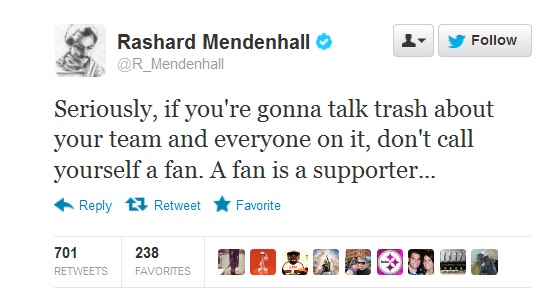 Back in 2009, the Pittsburgh Steelers hit a rough patch. Everything that could go wrong, did go wrong. And how did they respond? In a word, badly.

Mike Tomlin‘s weekly press conference became an absolute sham. Okay, it’s always been a sham but every week he’d make fiery pronouncements and then do absolutely nothing to follow up on them. His infamous promise to “Unleash Hell!” came that year and the team responded by unleashing a loss to a Raiders team that would win only 4 games. They followed that debacle by getting losing to an even more pathetic Cleveland team the following week.

While Tomlin blathered his empty rhetoric, the team played with absolutely no passion whatsoever. The defense blew fourth quarter leads five times, with four of them ending in losses. When the fans and local media began calling them on their poor play, they responded indignantly. Ryan Clark went on a tirade about how fans should support their team unconditionally.

Here we are three years later. And history looks to be repeating itself.

The Steelers haven’t stopped anybody in the fourth quarter all season. Tomlin continues to waste everybody’s time at his press conferences. And the players are turning surly. After losing to a pitiful Tennessee Titans team last Thursday, Rashard Mendenhall scolded fans on twitter for being critical. I wasn’t aware the Koran spoke about the qualities of a true fan.

Maybe he was cranky from all that fasting during Ramadan.

In any case, he should shut his Bin Laden-loving ass up. Fans pay money to go to games. They pay money to buy the team’s merchandise. They invest their time and emotion in the game. They have a right to be critical when the team doesn’t play up to their expectations.

Besides, a fan is somebody who follows a team passionately. Hence the word being derived from the word “fanatic.” Nowhere in the description does it say you’re supposed to root for the team regardless of how they’re doing. They have a name for that, it’s called “cheerleading.”

The local media are so far in the Steelers’ pockets, I bet every reporter for the two major papers can tell you whether Art Rooney II dresses to the left or the right. That said, when local reporters shockingly decide to speak the truth, the team and their players don’t know how to react. And it usually ends up with one of the players reverting back to their asshole jock persona.

Ike Taylor, who has played like absolute shit this season, has a weekly radio show. Okay, it’s not really radio, it’s streamed over the internet by the Tribune-Review. Full disclosure: a couple years ago when I wrote for NPC, TribLive invited me on to talk Stillers a couple times. Since then, they’ve cut costs and gone to a line-up of marginable “personalities.” One of which is Face Me Ike.

Ike went on a tirade about reporters “attacking” him which you can listen to by clicking here. Attacks are when the press goes after somebody for no reason at all. They’re CRITICIZING Ike because his play deserves criticism. Or was that game winning TD he gave up against the Titans or the 203 yards he surrendered to Demaryius Thomas in the season opener just bad luck?

People have already started drawing parallels between 2012 and 2009. In 2009, we missed the playoffs because we lost to a bunch of teams we had no business losing to. In 2012, we’ve already lost two games (Tennessee and Oakland) that we should have won. The lies continue spewing forth from the corrupt Tomlin regime. And now the players are turning on the fans and press.

It’s deja vu all over again.