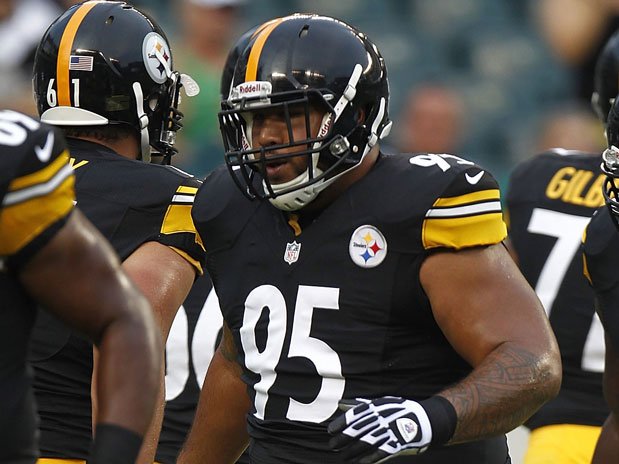 The Pittsburgh Steelers have suspended rookie NT Alameda Ta’amu for a whopping two whole weeks. TWO WEEKS! All he did was go on a drunken rampage that ended with an arrest on 15 separate counts, five of which are considered felonies. This reminds me of when my best friend was a kid and would pitch a fit over his mom not buying him the latest He-Man figure and would have to sit in a “time-out” for twenty minutes.

I guess what I’m saying is, Ta’amu needs an ass-whooping.

In the meantime, October 23rd will be interesting. Ta’amu is scheduled for his first preliminary hearing on that date. When Mike Florio over at ProFootballTalk posted the Ta’amu story, he threw in a shot about how Steelers in Pittsburgh can get away with anything. Some Steeler fans on twitter didn’t like that and saw it as more evidence of Mike’s anti-Steeler bias.

Well, Florio definitely hates the Steelers but he’s right about the town being a bunch of fanboys. Of course, the same can be said about a lot of other NFL cities. And don’t get me started on what colleges get away with. We’re a culture that worships their athletes. Ancient Romans sculpted tributes to their Gods, we make statues of Mario Lemieux.

If Ta’amu was just any other fat slob who got blasted, then played bumper cars all over the South Side before being gang tackled by an army of police officers, he’d be bending over in the shower for a wayward Hell’s Angel as we speak. But he’s a Steeler in a town that loves the Steelers so I suspect the officers (Steeler fans, natch) will magically forget certain aspects of his arrest and the whole debacle will be plead down to a simple DUI. Like he had a few too many at Station Square and got pulled over going through a drive in at McDonald’s instead of nearly causing mass carnage.

I hope I’m wrong. But if being a sports fan in this town for 30 odd years has taught me anything, it’s always side with the athlete, no matter what he’s done. Unless of course your name is Ben Roethlisberger.