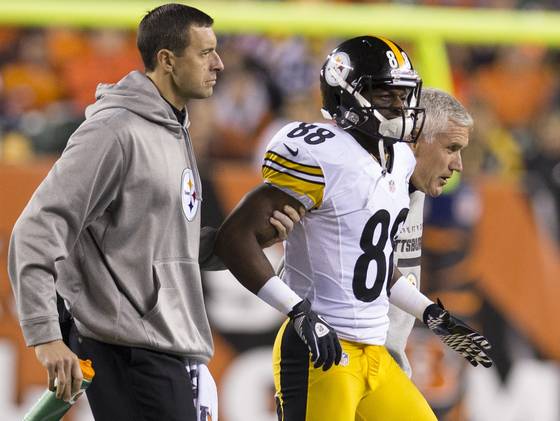 There were quite a few comical moments in Sunday night’s game between the Pittsburgh Steelers and Cincinnati Bengals. We had Ben Roethlisberger trying to call a time out before a curiously early attempt at a two point conversion only to be denied by the clueless refs. Big Ben ran the play anyway, making the conversion but pissing off Mike Tomlin who glared at him from the sidelines thinking he ignored coaches’ call for time.

Then we had LaMarr Woodley making arguably the best catch of the night on his GINGERception of Andy Dalton. I’d like to say it was a great play by the much-maligned Steelers D but it was actually pure luck. Upon replay, you see Dalton actually lost the ball on a pump fake. The duck clanged off the back of a Cincy lineman’s head before falling into Woodman’s waiting arms.

On second thought, that was the best catch of the night.

But the Academy Award for craziness goes to wide receiver Emmanuel Sanders. Early in the 4th quarter, Ben got shaken up after running for his life on a busted play. If the zebras had called an injury time out, by rule Ben would’ve had to go to the sideline for a big third down play (or the Steelers would’ve had to burn a time out). So what happened?

Manny Sanders went down like Bambi’s mother. He started clutching his leg and writhing in pain like the Nature Boy (WOOOOOO!) had just put him in the figure-four leglock. Trainers helped him hop off the field while Ben stood around collecting his marbles. It should be noted the leg he hopped off on was the opposite leg he was grabbing as he fell to the ground. Bobby DeNiro wouldn’t make that kind of mistake, son.

Meanwhile, noted Steelers hater Cris Collinsworth and Al Michaels turned into stand-up comedians. Granted, it was the most obvious flop since the NBA Finals but they could still barely contain their mirth. Evidently, Sanders’ dive set the interwebs on fire as everyone from Huffington Post to some baseball player named Evan Longoria commented on it.

Collinsworth joked that Sanders might be “getting a letter from the league offices.” It’s true that a few weeks ago they sent out a memo chiding teams for faking injuries. And we know how the Ginger Dictator loves to pick on the Steelers. However, I think any fine would be pretty meaningless. The game is over. The time out was saved. It’s not like Goodell can go back and change any of that. Plus, I’m sure Ben and/or his teammates would be happy to “help out” if Manny were to accrue a fine.

In the meantime, I applaud him for the heads up play. He may not be the Steelers best receiver but he sure is the cleverest.