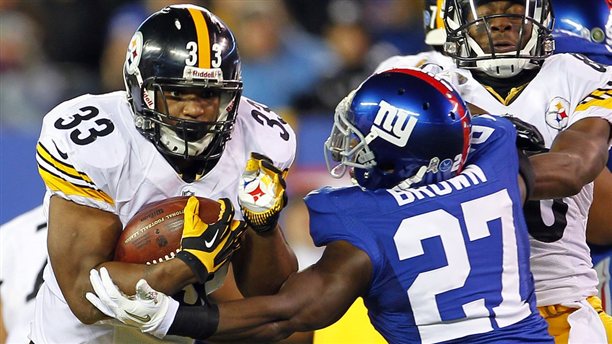 Maybe they should skip hotels from now on.

Flying in the morning of the game proved a minor distraction for the Pittsburgh Steelers, who rose above travel issues, crooked referees, and mounting injuries to defeat the defending Super Bowl champion New York Giants 24-20. One of the great things about NFL football is every season is like a summer blockbuster. Sixteen games don’t seem like a lot but it’s still long enough to pack a year’s worth of ups and downs into four months.

Not too long ago, we were wondering if this was going to be another lost year for the Black and Gold. The team was 2-3 with division rival Cincy, the Redskins and their Ultimate Weapon (TM) at QB and the defending champs looming on deck. Here we are on the other side of that slate riding a three game winning streak to up our record to 5-3 with the worst team in football up next on Monday Night.

And that’s not even the most amazing part. What’s even more remarkable is how the Steelers are getting it done.

Jonathan Dwyer had back-to-back 100 yard games but was sidelined by an sore calf. Nominal starter Rashard Mendenhall joined him on the pine for the third straight week. This left Isaac Redman next man up. All he did was rumble for 147 yards against a tough Giants defense.

Then there was the much-maligned return game. For the first time all season, long returns weren’t wiped out by yellow hankies (probably because Mike Tomlin has finally started benching the repeat offenders). Antonio Brown has been the Steelers punt returner for a couple years now, making the Pro Bowl last year thanks to his special teams play. Early in the game, AB left with a sprained ankle so Emmanuel Sanders took his place on punts. All he did was bust one 63 yards which didn’t lead to a score but flipped field position contributing greatly to the eventual game winning drive.

Antonio Brown is undoubtedly the Steelers top receiver. With him out, the offense barely missed a beat. Seeing his first significant playing time this year, Jerricho Cotchery made 4 catches, several on key third downs. Sanders only caught two balls but they were both huge receptions, one a beautiful catch in the back of the end zone for the Steelers’ first TD and the other a 16 yarder on third down to effectively ice the game with two minutes left.

The turning point of the game came early in the fourth quarter. Down 10, Mike Wallace took a short slant and outran the entire Big Blue D for a 51 TD. Other than the deep bomb against the Titans, it was Wallace’s first real game-changing play this year. The catch-and-run was, dare I say, Fitzgerald-esque.

After a three and out by the Giants, Sanders ripped off his 63 yarder to set the Steelers up at the NY 13. After going nowhere fast, they lined up for a short field goal. Rookie Drew Butler flipped the ball over his shoulder but Stonecold Shaun Suisham couldn’t elude an unblocked defender for the 1st down. The suddenly resurgent Steelers defense forced a three and out and the resulting great field position set up a sweet drive with some big catches from Heath and the Cotch Rocket that eventually culminated in iRed’s game-winning 1 yard TD.

People are going to say this is the latest example of Tomlin’s reckless decision-making but I liked the fake FG try. It showed faith in the defense. Given how they’ve played the past few weeks, there is no reason not to have faith in that unit.

Going back to our early season worries, nothing concerned us more than the state of the Steelers D. They looked, to use a cliche, old, slow, and done. Since then, they’ve seemingly risen from the ashes. They still don’t generate enough Splash Plays, which is obviously a concern, although Ike Taylor did come down with an early INT to set up their first TD and they just missed two more picks and a late fumble recovery by James Harrison. Regardless of the sacks and turnovers, though, they just smother teams with a fast hard-hitting style that is getting better by the week.

The scoreboard gives the Giants 20 points but only 6 of those belong to the Steelers’ D. NY’s first score came after the refs basically did everything in their power to give them a TD. First, they called a horrible 40+ yard pass interference on Keenan Lewis when he barely touched the receiver. Then, after the Steelers made three great stops at the goal line, they called a ridiculous personal foul on Ryan Clark. The Ike Taylor Mystery Pass Interference was our frontrunner for Horrible Call of the Year but this game gave us TWO legit candidates for that title. The Clark hit was one, as he struck the receiver in the ribs with his shoulder pads a split second after the ball was thrown. Nothing illegal whatsoever.

Our other contender was an even more monumentally stupid call which put the Giants ahead before halftime. Ben Roethlisberger dropped back to pass and was hit as his arm was moving forward. The ball was clearly in his hand and the ball was clearly going forward, yet the corrupt zebras called it a fumble which was returned for a TD. At worst they should have called Tuck Rule since the ball was still in the cocked position when it came out. But instead they made a call so bad the Lingerie Football ref was probably sitting at home laughing.

Despite playing two opponents, the Giants and the refs, the Steelers D still managed to put together a tremendous defensive effort. They completely shut down the Giants in the second half, allowing only two measly field goals, one of which came after a Big Ben INT deep in his own end.

After the first month the season, we had a lot of questions. Questions about the offensive line. Questions about the defense. Questions about Todd Haley‘s offense. Here we are at the mid-point of the season and those questions don’t seem so pressing any more. The O-line is mauling people, protecting Ben while gashing people on the ground. The defense is shutting down good offenses for long stretches. And the Haley O is ruthlessly efficient with Ben hitting a bunch of different receivers and a new hero stepping up seemingly every drive. I don’t know where the season is going to end up but 5-3 and clicking in all three phases?