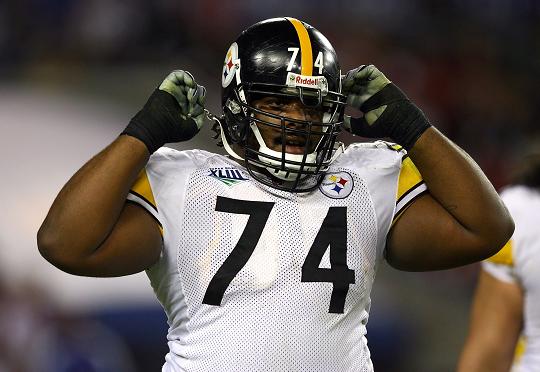 I don’t even know where to begin with last night’s debacle.

Might as well start with the positives I guess. The Pittsburgh Steelers pulled out a 16-13 win against the Kansas City Chiefs on Monday Night Football after Lawrence Timmons intercepted Matt Cassel’s first pass in overtime. One play later, Stonecold Shaun Suisham booted a 23 yarder to end the misery. And that’s about all the good things I have to say about what happened last night.

Ben Roethlisberger left the game in the third quarter with what preliminary reports are saying is a “sprained” throwing shoulder. I’m so glad we brought in Todd Haley‘s boring dink and dunk offense to protect him from getting injured. That’s sarcasm by the way. Of course, Ben has been remarkably healthy all season so it totally makes sense he’d suffer a serious injury a week before the Steelers play the Baltimore Ravens.

Ben wasn’t exactly lighting up the scoreboard before the injury. If not for a circus catch by Mike Wallace in the end zone, Ben would’ve departed with two FGs to show for his efforts. All week, fans and talking heads alike were calling this game Boss Todd’s shot at revenge against the team that canned him last season. What we failed to take into account is that familiarity is a two way street. Teams practice against each other all week for months on end meaning the Chiefs defense probably has taken hundreds of snaps against Haley’s offense during his tenure there. The result, as Max Starks later told reporters, was that KC’s D recognized practically every play they called last night.

Let’s not make excuses for the offense, though. The tone was set early when they went three and out on their first two possessions and Willie Colon was flagged for “cussing.” Swearing is a crime? What the f#ck?

Any questions about Antonio Brown‘s worth to the team were answered as Manny Sanders repeatedly failed to step up in his absence. The running game was absolutely atrocious the entire game. Isaac Redman was pathetic, fumbling the ball to gift wrap a FG early then getting stoned on a crucial 4th and inches early in the second half. Jon Dwyer relieved him and only did slightly better, averaging 2.9 ypc to iRed’s sad 2.6 ypc. Dwyer had a couple decent runs and he was running into a 7 man box after Ben got hurt but it still was far from an acceptable performance.

Let’s talk about the post-Ben offense. For whatever reason, Steeler Nation seems to have turned on Charlie Batch, mocking him as a broke washed-up bum. Well, if you’re comfortable with Byron Leftwich after what we saw last night then I don’t know what say. The guy plays quarterback like he’s trying to win a stuffed giraffe for his girlfriend at Kenneywood.

Okay, this was Lefty’s first action in like three years. Back-ups are rusty enough since they only get a handful of snaps at practice. And when he gets a nice clean pocket and about five seconds to wind up, he does throw a pretty ball. At the same time, he looked even more immobile than the last time we saw him. Leave it to Mike Tomlin to sign the only immobile black quarterback in NFL history. Lefty took about four or five vicious shots in about a quarter and half of work. He’s never going to survive if he has to play a significant stretch. What’s more, his goofy throwing motion and lousy accuracy is all wrong for an offense that relies on timing and accuracy.

Gotta love that with Ben under center, Haley went deep twice all season, then Leftwich comes in and his first pass is a bomb to Wallace.

I haven’t yet mentioned the Steelers defense. On paper, it looks like they had a good game. In reality, Kansas City’s incompetence was the only thing which saved them from a horrible loss. While we’re on the subject of terrible games, Ziggy Hood played like absolute shit. The Chiefs ran Jamaal Charles (23 carries 100 yards) right at him time after time for big chunks of yardage. Only when Dick LeBeau started switching up Hood and Bret Keisel did the bleeding stop. How bad does Ziggy have to play before Ironhead Junior gets more than a handful of snaps?

Did LaMarr Woodley play yesterday? How about James Harrison? You didn’t hear either name at all. If KC had receivers who didn’t fall into the fetal position when faced with contact and stopped shooting themselves in the foot with stupid penalties, this game wouldn’t have been close. In fact, the key series of the game occurred early in the third when a 22 yard TD to Dwayne Bowe was wiped out on a ticky-tack holding penalty then the KC kicker missed the ensuing FG wide right.

Late in the quarter, the pitiful Steelers offense was going nowhere fast when pass interference and roughing the passer penalties let them drive for the game-tying FG. Even at the end of the game KC tried their damnedest to snatch defeat from the jaws of mediocrity. Cassel hit Bowe for a nice gain but Bowe lost the ball when Ryan Clark concussed himself while dislodging the ball. Then TE Tony Moeki got flagged for offensive PI which took them out of FG range and left them with 4th and 15. Of course, Ike Taylor played it too loose and let them convert a 27 yard pass play.

The Chiefs came in having never led during regulation all season. They led for almost half the game. The Chiefs came in leading the league in turnovers. Until Cassel threw the pick to Timmons in OT (which was tipped by the Diesel, btw), they had zero giveaways. Yeah, they were a desperate team. Yeah, maybe this was a trap game. Injuries, Haley, their Super Bowl, yadda yadda…

No excuses. Any good feelings from last week’s game against the Giants are long gone. This was an abominable effort that would’ve resulted in a loss against any halfway competent team. And now an offense which has already been average at best needs to find a way to score points with their back-up QB. On top of all this, two of the next three games are against the Ravens. Suddenly this season isn’t looking so promising.