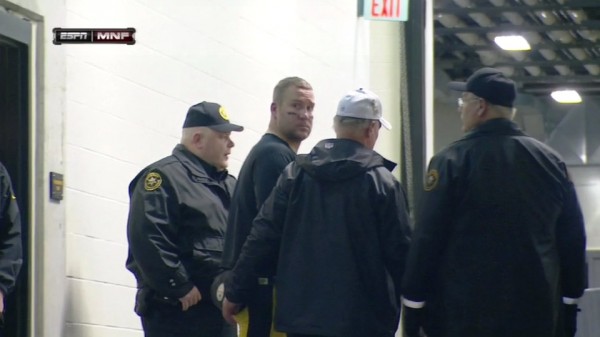 The Pittsburgh Steelers still haven’t released a definitive diagnoses of Ben Roethlisberger‘s injury. All coach Mike Tomlin would confirm in yesterday’s press conference was that Byron Leftwich is starting Sunday night against the Ravens. When asked if the injury would sideline Ben for multiple weeks, Tomlin ignored the question with his typical measure of arrogance and platitudes: “I live in the present. He is out this week.”

Ben also spoke to the media and was a bit more forthcoming. Yesterday, I made a quick mention of “bruised ribs” which he suffered in addition to the shoulder separation. I only did that because Tomlin barely acknowledged them himself in his initial discussion of Roethlisberger’s injury. Now it appears the rib injury may be the most serious obstacle to his returning to the field.

Those “bruised ribs” was actually a dislocation of the first rib according to Big Ben. The danger there is if the rib were to fully separate and poke inward, it could puncture his aorta. Yep, that dreaded aorta puncture again. When asked about it, Tomlin appeared befuddled, trying to argue that the dislocated rib was simply an extension of the SC separation I discussed yesterday.

Let me break something down for Mike Tomlin: SC stands for sternoclavical meaning sternum (your breast bone) and clavical (collarbone). Your rib is located, surprisingly enough, in your rib cage. I’m not a doctor but it seems pretty self evident those are two clear and distinct injuries.

Ben told reporters he couldn’t play until the rib thing was healed up, as he seems far more concerned with that than the shoulder separation. As anybody who ever bruised a rib (me!) can attest, those hurt like a motherf*cker. Every movement, even laying down or breathing causes pain. While Ben has a Terminator-like pain threshold, I imagine even he would have trouble playing through something like that.

In the meantime, we can turn our attention to the dawn of the Leftwich era. There has been heated debate on sports radio the past couple days as to whether Lefty is the best choice to start on Sunday. As we saw during his brief disastrous stint Monday, there is question over whether he can effectively run the Todd Haley offense. Even though Charlie Batch is a thousand years old, he may be the better fit.

Leftwich no doubt has better physical tools than Charlie. He also has a longer wind up than AJ Burnett. Boss Todd’s offense relies on quick accurate throws, the words quick and accurate not being things Lefty is known for. In a standard offense, yes, you want a quarterback with a strong arm who can make every throw. In Haley’s dink and dunk, not so much.  Yeah, maybe Batch can’t throw the ball more than 10 yards but he is a much better field general than Leftwich and doesn’t make as many mistakes.