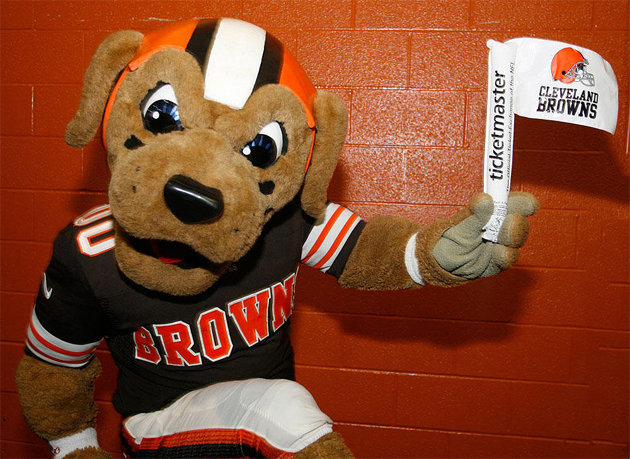 Don’t look past the Cleveland Browns. When you stop laughing, I’ll try to explain. Yes, the Browns are 2-8. Yes, the Browns are in the midst of yet another miserable season in a long run of them. Yes, the Browns have already given Mike Holmgren the axe with former Pittsburgh Steelers minority owner Jimmy Haslam likely to make more changes after the season. I know all this doesn’t sound like a team ready to give the Steelers a fight on Sunday but despite everything the Browns aren’t ready to wave the white flag.

Oh, wait… Maybe they are…

One thing the Browns are successful at is getting psyched for the Steelers. I’ll spare you the painful trip down memory lane, suffice to say, when the two teams meet you can almost throw out the records. Cleveland has treated their annual meetings with us like their own little Super Bowl and it’s almost like a rivalry game in college where it doesn’t matter how bad your team is on paper, the two teams always find a way to make things interesting. Throw in the fact Cleveland has been sneaky bad (as in, they lose but put forth highly competitive efforts) and the Steelers are injury ravaged and you have a recipe for anything to happen.

On draft day, I sorta laughed at the selection of quarterback Brandon Weedon. In reality, Weedon has looked like a pretty solid signal caller despite being a rookie on a team with very few offensive weapons. I still think it was a silly pick because if you look across the NFL, a whole bunch of rookie QBs have done well this season, from Andrew Luck and RGIII to lesser publicized names like Ryan Tannehill and Russell Wilson and they’re all 5-6 years younger than Weedon so they’ll have more time to grow. Right now, however, I think given the chance to re-draft teams like the Eagles or Cardinals would take Weedon over the QBs they chose because he’s shown the kind of poise that suggests he could step right in and do a capable job of running an established offense.

Unfortunately, he doesn’t have an established offense in Cleveland. In fact, he doesn’t have much to work with at all. When a RB leads your team in receiving, that’s not good. Their nominal #1 WR is Greg Little but he drops as many passes as he catches. The rest of the receiving corps is a collection of has beens and never weres. Weedon’s numbers don’t look particularly impressive (11 TDs 12 INT 2,300 yds) until you factor in the collection of riff raff he has to catch his passes.

The lone bright shining light in this oasis of suck is fellow rookie RB Trent Richardson. Browns legend Jim Brown dissed Richardson prior to the draft which must’ve lit a fire under him as he’s accounted for 670 yards on the ground and another 280 through the air. Richardson has fast become a weapon in the Ray Rice mold. He’s easily Cleveland’s most dangerous offensive player and must be contained if the Steelers hope to dash any thoughts of an upset.

Dick LeBeau‘s crew is coming off unarguably their finest effort of the season. I feel Joe Flacco and company are grossly overrated but to hold any team without an offensive touchdown, let alone a team one year removed from the AFC Championship game while your own offense is actively sabotaging your efforts, is a damn impressive feat. Ziggy Hood rebounded from the KC debacle and the D-line were the quiet heroes in stifling Ray Rice. Ike Taylor has shook off the early season funk and teamed with Keenan Lewis, who improves by the week, form a very fine secondary. While LaMarr Woodley and James Harrison haven’t played up to previous levels, the inside tandem of Larry Foote and Lawrence Timmons have picked up a lot of slack. Although Cleveland doesn’t have the talent Baltimore has, the team will need nearly the same effort because I don’t foresee our offense scoring a ton of points.

Charlie Batch makes his first start of the season after Byron Leftwich flushed a very winnable game down the crapper last Sunday. I have faith in Chaz. Every time Steeler Nation counts him out, he comes off the bench to prove the haters wrong. Given Todd Haley’s short quick West Coast style offense, I think Batch is an even better fit than Lefty and as long as his guys get open, he’ll get them the ball.

Of course, it’d be nice if the Steelers can continue their strong running attack. Mike Tomlin hasn’t committed to a starter but I think at this point you have to go with Jonathan Dwyer. Rashard Mendenhall may have the breakaway speed but he was back to his tap-dancing tricks against Baltimore. Dwyer has been by far the team’s most consistent back and I think he’s earned the chance to be the featured starter (when healthy) for the rest of the year. The Browns rank near the bottom of the league in run D so whoever starts should produce.

The receivers also need to start producing. I know the catch in the corner of the end zone against the Ravens was a tough play but Mike Wallace needs to make it. I caught a little of the Tampa game on Red Zone last Sunday and was struck by how much of a difference Vincent Jackson makes to the Bucs offense. That’s what $10+ million a year receivers do. They make the catches nobody else can make and they make them with frequency. Wallace had a brilliant catch against KC but those sort of big plays have been far too few for a guy who thinks he’s the best WR in football.

Antonio Brown is back practicing so I expect he’ll be a game time decision. Jerricho Cotchery is definitely out so we’ll probably see the return of Plaxico Burress in the Black and Gold. He likely won’t play much, probably just in the red zone (assuming we ever get there), but he should be plenty motivated after signing a 1 year deal when nobody else wanted him. Plax doesn’t have the skills he once had but this team needs all the red zone threats they can get so if he’s even a fraction of his old self he can’t do anything but help.

The Steelers are in a very precarious position. I’ve said all along that the losses to Tennessee and Oakland may come back to haunt them and unfortunately that is proving true. The Steelers can’t really afford to fall much farther back to the pack, especially with only a few very winnable games remaining on their schedule. Had they won the games they should of won earlier this year, we could afford a mid-season nose dive until Ben heals up. At this point, though, they really can’t.