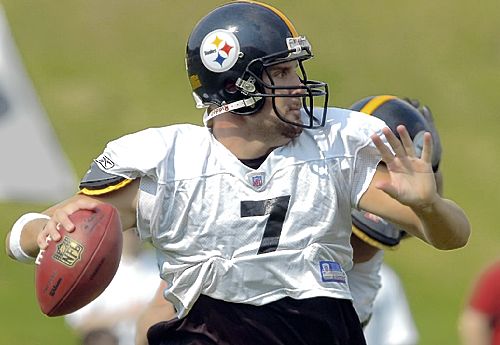 The Pittsburgh Steelers FINALLY get some good news on the injury front.

As I mentioned in yesterday’s post, the extent Ben Roethlisberger practiced later in the afternoon would determine whether there was a realistic shot at him returning against San Diego. Well, the tough sumbitch went out and practiced normally meaning he’s on track to return this Sunday. Head coach Mike Tomlin, normally as tight-lipped as the gestapo when it comes to injury updates, later told reporters “I saw him make the necessary throws.” Actually, he said more than that but as usual it was just Tomlin using a bunch of words to say what could be said in five. The bottom line is the concern over whether Ben had regained enough arm strength to run the offense seems moot.

Barring any late week set backs, the Steelers should have their starting quarterback back. In the meantime, ageless warrior Charlie Batch will keep sharp as the team’s primary back-up. Useless Byron Leftwich has been cleared to practice but between evaluating Ben and keeping Chaz ready just in case, there aren’t enough snaps to go around. Which is for the best since every rep Byron gets at practice is just wasted on a guy who’ll be hurt as soon as he bends over to tie his shoelaces anyway. Charlie Batch turns 38 today and he’s still one of the five or six best back-up QBs in the league.