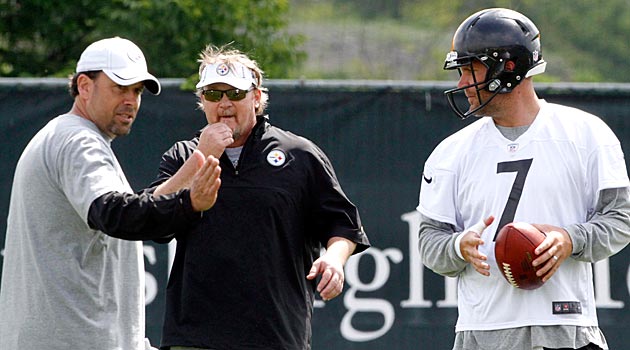 Ever since it was announced that Todd Haley would be the new offensive coordinator for the Pittsburgh Steelers people have been awaiting an eruption. Haley is known as an in-your-face hothead who has had confrontations with players everywhere he’s been. Everybody awaited the inevitable showdown with quarterback Ben Roethlisberger.

Following Saturday’s horrific loss to the Dallas Cowboys, those wishing for a blow-up finally (?) got their wish. Sort of. In his post-game comments, Ben seemed to take issue with the playcalling. Scratch that, he clearly did have issues with the game plan.

Could our long-awaited Big Ben vs Boss Todd showdown finally be here?

Mike Tomlin, in his weekly lie-fest, er, press conference tried to defuse the situation. When asked by reporters if there was a riff between his O-coordinator and star quarterback, Tomlin tersely answered that Ben was “on board with what we’re doing.” Not exactly a ringing endorsement but for a coach who treats minor information like government secrets, at least he sorta answered.

Tomlin’s answer didn’t stop the yinzers from burning up the local sports talk radio lines taking one side or the other. All this talk did was reinforce my opinion that I could never be a talk show host in this town because I’d hang up on 90% of the callers in about thirty seconds. In the space of about two hours, I heard everything from one moron seriously floating the idea that our two-time Super Bowl winning QB couldn’t read defenses to Mark Madden and his legion of brain-dead sycophants floating the idea that Ben should be calling the plays.

This is why I hate when the Steelers are doing poorly. Everybody loses their damn minds.

Let’s have some middle ground here. Ben is a great quarterback. However, he’s not Peyton Manning. I know somebody out there is probably reading that and going all “TWO SUPER BOWLS! HE WINS! PEYTON CHOKES! HERE WE GO, HERE GO!!!” to which I reply, stop being an obnoxious homer. Being a great quarterback doesn’t mean you’re a perfect quarterback.

Peyton has his shortcomings. He could never in a million years make the kind of play Ben made to Heath Miller in Dallas. But Peyton is his own offensive coordinator because he’s extremely cerebral. Ben isn’t. He makes dumb throws and poor decisions all the time. For evidence you need look no further than the pick that ended Sunday’s game. Ben needs an offensive coordinator.

At the same time, Ben should be consulted on the game plan. And I’m sure he is. All quarterbacks are because it’s important the man behind center is clear about the strategy. If you watched HBO’s Hard Knocks series, you’d recall the Jets’ Mark Sanchez and Dolphins’ Ryan Tannehill were both involved with their offensive game plans. If a coordinator would consult with those putzes, certainly ours takes into account the views of his QB.

I’ve certainly had my issues with Haley’s offense but I think any talk of firing him is ridiculous. This isn’t some wide receivers coach who got playcalling duties for the first time in his career. Haley oversaw high-powered offenses in Arizona and Dallas. He took a Chiefs team led by Matt freakin’ Cassell and turned Jamaal Charles and Dwayne Bowe into fantasy heroes. Haley knows how to coach an offense.

Has the offense struggled this year? Depends on how you look at it. They’re actually ahead of last year’s pace in terms of point total. Ben is also ahead of last year’s pace in terms of pass attempts, despite missing three games due to catastrophic injury. The fantasy football numbers are down, the team isn’t going to have a 4,000 yard passer, 1,000 yard rusher or two 1,000 yard receivers (Mike Wallace at 823 yards is the only player with a shot at that milestone) primarily due to Haley’s dink and dunk offense. However, stats are for agents and fantasy geeks, points are what matters.

Does Ben have a right to complain? Not really. Then again, Ben never seems to be happy with the offensive coordinator. He and Bruce Arians were extremely tight, to the point Arians was the guy responsible for him being in Milledgeville a few years back (Arians lives nearby during the off-season and Ben only found the area through him). At the same time, Ben used to complain about wanting a tall receiver or trying more no-huddle when the Flying Circus was in town. When the team played the Arizona Cardinals last year, Ben made a comment about how his first O-coordinator, Ken Whisenhunt, didn’t let him do enough. Rumor around town is they didn’t get along very well either which partially explains why Whiz was never seriously considered for the Steelers head coaching job.

Ben has a chip on his shoulder. He wants to prove to everybody he’s the best. That’s fine. But it’s the coach’s job to worry about the bigger picture. Letting your QB dictate the offense isn’t part of it.

Besides, if Ben wants to be the man, he should try getting the job done when handed the opportunity. He’s talked about closing games out on offense yet has repeatedly failed when given a chance. The D gave him a chance at the end of the Tennessee game and he didn’t pull it out. He had not one but two chances to win the Dallas game and failed. I’m not discounting all the times Ben has literally snatched victory from the jaws of defeat but this is a what have you done lately business. And lately it hasn’t been the plays that have been called rather the execution of said plays. Until everybody starts playing better, including our franchise QB, it doesn’t matter who is calling what.