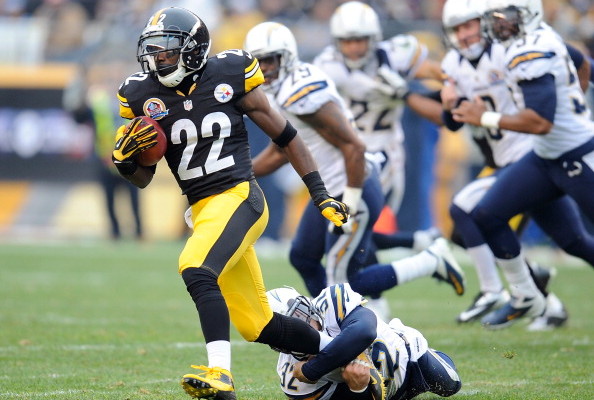 And so is Dan Rooney. Less than a month after stepping down as Ambassador to Ireland, the patriarch of the Pittsburgh Steelers has resumed his role as team chairman. Perhaps not coincidentally, the first major incident to occur since his return was met with swift and decisive action. Perhaps the culture of arrogance and assholery which has festered under the reign of his son, Art Rooney II, is finally going to be addressed.

Running back Chris Rainey was arrested yesterday morning after pimp slapping his girlfriend in front of witnesses. Later that very same afternoon, the Steelers announced they cut the promising rookie. I realize no NFL team is going to be made up of 53 choir boys. However, it’s nice to see the Steelers brass paying a little more attention to weeding out the bad apples instead of worrying about firing offensive coordinators.

Rainey f-ing up isn’t exactly shocking. While in college, he was suspended for several games after threatening to kill an ex-girlfriend via text message. Earlier this season, he got into a scuffle at a casino. The only reason the Steelers drafted this headcase was because he lived with the Pouncey family during high school and Maurkice vouched for him. Considering Pouncey is one of the more arrogant and self-absorbed members of the team, it’s not surprising he’s a lousy judge of character.

Some people are crying hypocrisy over the team releasing Rainey after his first offense. Well, I’m sure there was a secret deal between the Steelers and Rainey much like the one they made with Mike Adams on draft day. Adams, you may recall, got popped for drug use at the combine which led to most teams, including the Steelers, taking him off their draft boards. Adams sent a heartfelt letter to the Rooneys apologizing for the mistake and vowing to walk the straight and narrow. After taking him in the second round, Steelers GM Kevin Colbert made it clear that Adams was in a strict one strike and you’re out situation.

Now, it is hard to justify cutting Rainey when the team still has NT Alameda Ta’amu on the roster. Ta’amu went on a drunken rampage through the South Side which resulted in 18 separate charges, several of which are listed as felonies. If you or I did what Ta’amu did, we’d still be sitting in jail or the hospital after the cops went all Rodney King on our ass. Oh the Steelers released the moron after the incident but quietly re-signed him the practice squad a week later then just as quietly re-signed him to the main roster when the season ended.

At the same time, it’s hard to argue Rainey was released because he was less important than Ta’amu. While Ta’amu plays NT, a much harder position to fill than RB, there has been zero evidence that he has any future here. He didn’t play at all last season so penciling him in to replace Casey Hampton is premature at best. Meanwhile, Rainey saw quite a bit of action, returning 39 kickoffs for 1,035 yards while rushing for 102 yards and catching another 60 worth of passes.

What’s more, Rainey was the only running back currently under contract for next season. Issac Redman, Jonathan Dwyer and Rashard Mendenhall are all free agents. While it was pretty clear that Rainey was way too tiny to be a featured back, he did show promise as a returner and third down threat out of the backfield. Considering the Steelers have had four backs see significant playing time the past couple seasons, it looks like the backfield is in for a pretty big overhaul with at least two new faces added to the mix.

We knew this off-season was going to be one of upheaval.  Of course, I didn’t expect it to begin with the elimination of every running back on our roster. Although in this case I have to commend the Steelers for doing the right thing. Let’s hope this zero tolerance policy becomes the norm rather than the exception.