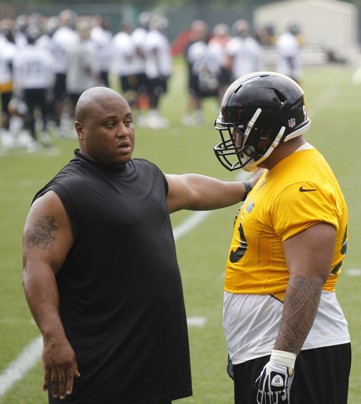 Of course he does. He’s a football player in Pittsburgh. Was there ever any doubt?

In the least shocking development of the off-season, Pittsburgh Steelers nose tackle Alameda Ta’amu got the legal equivalent of being sent to bed without supper – which, for him, would probably have been a harsher punishment than the one he actually received – after pleading guilty to four charges stemming from the drunken rampage he went on back in October. Ta’amu was originally charged with 15 separate offenses ranging from misdemeanors like resisting arrest and driving drunk to felonies such as fleeing the police and aggravated assault while driving. Miraculously, his lawyer plead all that down to four counts to which Ta’amu was sentenced to 18 months probation and four days in the Drunk Tank (basically a halfway house where DUI offenders are monitored).

Ever hear of the Chewbacca Defense? Well, it’s got nothing on the I’m a Steeler Defense.

Think I’m lying? Here is Ta’amu’s explanation for his behavior as told to the judge: “I was a rookie, I was scared. I was a Steeler. I was drunk driving.”

As soon as the yinzer judge heard the word “Steeler,” his Pavlovian response to cheer blindly while waving a Terrible Towel couldn’t be stopped. The fact he laughably claimed Ta’amu was being treated “the same as any other first time offender” is besides the point. I’m sure if you or I got hammered down in the South Side, sideswiped several parked cars before driving the wrong way down a one way street, then ran away from the po-po until several of them managed to wrestle us to the ground, we’d totally get a year and half probation.

But, hey, the Steelers need a nose tackle so we can’t be locking up Ta’amu now can we? Casey Hampton remains an unsigned free agent and it’s looking more and more like his NFL career is over. Which leaves Steve McClendon and Ta’amu as the only options at NT unless they find somebody in the draft. And it’s not like 6’4 350 pound humans grow on trees.